Battles + A Place to Bury Strangers at Webster Hall

2007 has been a big year for Battles. When I last saw the Brooklyn post-rock band in the spring, it was before a relatively modest audience at NYU (you could still move! Easily!), just before the release of their groundbreaking full-length debut Mirrored. Since then, Mirrored has collected various (well-deserved) critical accolades as one of the year’s most inventive rock albums, and the band has toured incessantly across North America and Europe. At last that tour is at an end, closing out with a final home performance at Webster Hall to an audience that filled much of that space and, this time, posed a reasonable obstacle to movement despite the venue’s generous capacity.

It’s with good reason that their crowds have multiplied. Live Battles is that rare spectacle that possesses equal parts scientific invention and visceral rock power. Technology plays a roll, with the guitars getting tweaked, re-shaped, and looped in realtime via various electronics and laptops, but that roll never overshadows the very human spontaneity driving it. Conversely, experimental guitarist Tyondai Braxton has narrowed the typical post-rock pop-sense gap by singing, but opts to do it only through the warping effects of heavy digital processing. For his part, drummer John Stanier does his best to invest math-rock rhythmic gymnastics with a breakneck force that would render any drum machine instantly redundant.

As is apparently typical, the set opened with a first example of how to take a simple guitar riff and transform it into heavy texture in a matter of seconds. That texture was quickly joined by the remaining guitars in an electric throb that gradually became recognizable as the opening moments of “Tij”. This and subsequent tracks seemed stretched out and extended, revealing the inner workings of the components as they were laid down and modified into place, but also allowing the band to indulge in vague jam tendencies as they slightly varied pounding riffs of chunky guitar and keys. Fortunately, their sound, for all its crescendos and digital embellishment, is surprisingly lean and sinewy, with licks often composed of the bare minimum of notes needed to drive things forward. So ultimately, mercifully, these jam extensions cannot be excessively self-indulgent.

Things picked up a bit during “Tonto”, which featured some of the band’s finest rhythmic double-takes, and spawned a transient mosh pit, but really peaked with first single “Atlas”. This, evidently, was what the audience was waiting for. With the first tell-tale rhythm loops easing in, they began to clap along in unison, gradually increasing their fervor to include attempts at singing along with Braxton’s pitched-up worker-elf vocals and a level of mass crowd movement that seemed to be causing the entire floor of Webster Hall to lurch up and down in time. Not only is the NYC dancing ban apparently over (circa Dan Deacon, Girl Talk, Japanther) but in their new zeal, audiences are finding ways to move even to jolting post-rock. Oddly, on this and several other songs, the vocals seemed rather quieter and deeper-set in the mix, whatever Braxton’s gesticulating image might have us believe. Even odder, on “Atlas” the vocals seemed to be lagging slightly behind the rest of the song, a peculiarity that didn’t seem to phase the audience, and was corrected, anyway, by the epic extended performance of “Race:In” shortly after.

Openers for the show were the suddenly-everywhere A Place to Bury Strangers, whose set I missed but am still confident in describing as “one of the best complete live audio-visual packages in NYC” and “a strong reminder that shoegaze can (should, perhaps) be abrasive as often as it is ethereal”, while co-opener White Williams blasted perfunctory neo-disco/electro that wholly failed to engage the audience, some of whom took to sitting on the floor at this point. So perhaps the dancing ban is, in fact, only contingently lifted. 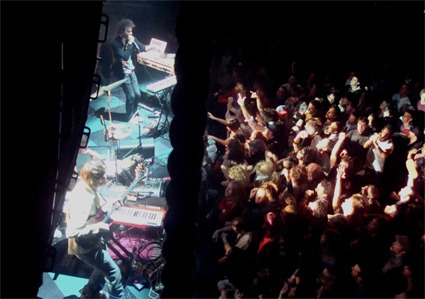