Move over, APTBS. The title of “loudest band in New York” is yours no more. The newgazers don't deserve to hold John Zorn and Lou Reed's cochlear implants, especially since the downtown legends'll be needing after Tuesday night's aural carpet-bombing of (Le) Poisson Rouge.

It was almost hard to believe what you were watching for the first 20 or so minutes of this thing. In the heart of asshole-infested Bleecker Street were two avant-garde titans, musical veterans who had stayed relevant by refusing to be pigeonholed by their earlier successes; Reed through a weirdly fascinating late-career transformation into a Kevin Shields-style mad scientist, Zorn through his remarkable ability to continue plunging off the musical deep-end, even when there doesn't seem to be much more deep end left.

Their first couple compositions (or jams or suites or what have you) saw Reed providing a droning backdrop to Zorn's famously erratic tenor sax. Zorn's playing can be likened to bee swarms, rush hour traffic, bloodcurdling screams, flocks of geese and 18th-century Hassidic liturgical music–a frustrating mix considering Zorn's unmatched ability to suggest melody and structure while cacophonously undermining both. He'll toy with a klezmer-inspired phrase or two before producing sounds that a saxophone seems physically incapable of making, signaling both a philosophical rejection of the very idea of beauty or even coherency in jazz, and an embrace of the opposite theory: that jazz is about tension, discomfort, and a deliberately confused sense of just how it's supposed to operate. The first half of the set was theory turned to po-mo gold: Zorn made that sax squeal through every decibel range imaginable without straying far from his less grating, Naked City-era work.

Reed was seated behind a control panel of looping pedals and samplers, but was still able to evoke the manic experimentalism that shines through in “Sister Ray,” “Heroin” or any number of other boundary-pushing VU numbers. Zorn's sax crescendos (and really you had to be there just to understand how hypnotically loud and intense these could get) were underpinned by Reed's slow-building layers of drone, and the show's first 20 minutes showed that the nearly-fossilized ex-front man of the most important band ever was still capable of doing something interesting and relevant.

Since this was the Philistine West Village, the there-to-be-seen crowd was none too pleased with his refusal to play anything with lyrics, or a tune or a John Cale-penned guitar riff. These people apparently didn't get the memo about Lou Reed being married to Laurie Anderson, or about John Zorn being on the bill, or about a similar Reed-Anderson-Zorn show at Zorn's The Stone several months back. LPR's location is unfortunate and slightly bizarre: it was shocking to think that I was seeing a Reed and Zorn show across the street from the bar where I came closest to getting beat up in this town (the Back Fence, for the curious. Advice: don't accidentally nudge ANYBODY); less shocking to see a veritable mass exodus 20 minutes into the set.

But then again, the ensuing 40 minutes made me wonder whether the yuppies were on to something. Gone were Zorn's flirtations with consonance and melody; gone were Reed's attempts at playing anything other than solid, nearly undifferentiated blocks of sound. An appearance from former Faith No More front man Mike Patton only ratcheted up the weirdness. Unfortunately for Lou Reed, Patten's screaming, grinding, beat boxing who the hell knows what gave off the impression that washed-up rockers need only to take a superficial foray into experimental music to reclaim at least some artistic relevance or integrity.

Things abruptly became unbearable, and in retrospect Patton had little to do with it. Reed and Zorn succumbed to repetition–those crescendos lost whatever “holy shit” quality they had an hour ago and became painfully monotonous; meanwhile, Poisson Rouge's fantastic acoustics ensured that this was just as madness-inducing from the back of the house as it was from the first couple of rows.

This show began as one of the coolest of the summer, and ended sounding like a freight train hitting a truck full of angry kittens. Is the lesson here that theoretically interesting music should has a shelf life? Is it that late-career legends like Lou Reed should conform to expectation and play “Sweet Jane”? Or is it that a Zorn-Reed collab that makes better use of Reed's once-prototypical thrashing guitar style and Zorn's more accessible, less ear-splitting tendencies could be a little less of a shitshow than this thing devolved into? Or is it that the daring, acoustically-dazzling Poisson Rouge (Deerhunter's playing there Tuesday night) may rescue the West Village from the cultural wastes? Ask me when the ringing dies down.

I'm at a bit of a loss here.It was almost hard to believe what you were watching for the first 20 or so minutes of this thing. In the heart of asshole-infested Bleecker Street were two avant-garde titans, musical veterans who had stayed relevant by refusing to be pigeonholed by their earlier successes; Reed through a weirdly fascinating late-career transformation into a Kevin Shields-style mad scientist, Zorn through his remarkable ability to continue plunging off... 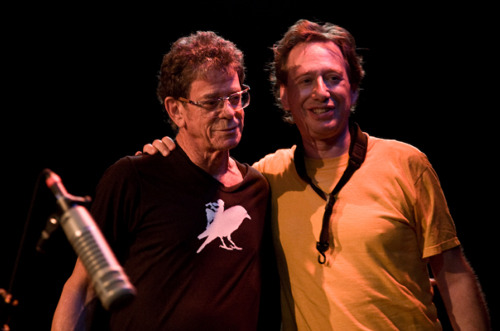