Another week, another excellent afternoon of free music at McCarren Park Pool. It turned out to be another good show for audience participation. While I didn't spot any flying articles of clothing, Baltimore's Dan Deacon did manage to get Brooklyners to clear a large circle and hold a dance contest, scream “McCarren Pool is a Pyramid” in long single-syllable breaths, crowd surf, and just generally go wild (par for the course for Deacon), while the Octopus Project responded by handing out long balloons for audience members to inflate and swing dramatically while a trio of girls waved homemade animal-face signs. Also, there was a new volleyball-style game over by the Slip'n'Slide.

Opener OCDJ and Deacon, breaking with Pool Party tradition (while following their own), dropped their rigs into the pool itself and played surrounded by their audiences, becoming harder to see but punching through usual performer/crowd boundaries. OCDJ actually had me fooled for a minute, as, clad in a cartoon cat mask and yellow sweater, he began playing hip-hop cut-ups over 8-bit ice cream truck melodies. It could have been Deacon debuting new material in preparation for his upcoming tour with Girl Talk, but instead it turned out to be OCDJ, who held up well in his own right and got the crowd moving to murmurs of “I've never heard him before, but I like it”. Later, one song featured an actual ice cream truck melody, set to beats.

Dan Deacon followed, (after a few minutes set up during which he requested of the DJ to put “Who Let the Dogs Out” on repeat), with a set of his now familiar hyperactive electro-pop. Amongst new tracks off of his recent LP Spiderman of the Rings, he also touched upon old favorites like “Lion with a Shark's Head” and “Big Big Big Big Big Big” (I think that is the right number of “Bigs”, but I could be wrong).

San Francisco's Erase Errata moved the action back up onto the proper stage to blaze through a set of brisk, wiry no-wave-era post-punk. Apparently, the trio's noisy, discordant songs are largely composed through improvisation, but there didn't seem to be much in the way of loose ends or noodling interludes left here. Their sound, instead, is distilled down for maximum impact and fed out to the audience with rapidly moving, skillful fingers.

For no reason that I can discern, colorful New York-based Japanese punk band Peelander Z popper up on stage after Erase Errata, wearing trademark superhero outfits and brandishing signs announcing the arrival of Austin's the Octopus Project. Perhaps they've toured together, or are otherwise friends, but the departing vividly yellow, pink, and red backs were a sharp contrast to the stylish black and white attire the Octopus Project emerged wearing.

The Octopus Project plays a sort of instrumental rock by way of electronics, or electronic music by way of straight-up rock. Live and sequenced drums collide and members Yvonne Lambert, Josh Lambert, and Toto Miranda (here backed by a couple extra musicians) continuously traded a variety of guitars, keyboards, glockenspiel, and even theramin. The latter was especially impressive, as Yvonne's every precise motion was clearly translated into the instrument's clear, glassy warble. After closing with the quintessential “Music is Happiness” and a hyperactive new piece from an album due in the fall, they returned for an encore involving the Lamberts' mom's “favorite song, despite the embarrassing title: 'Porno Disaster'”. 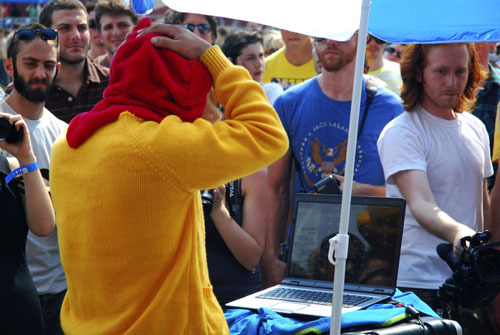 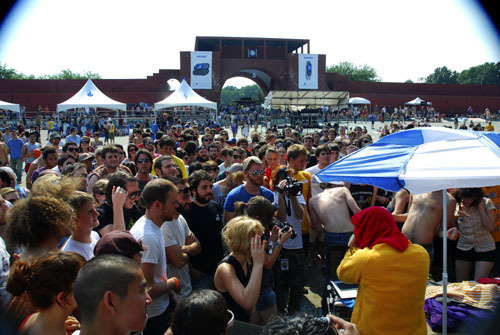 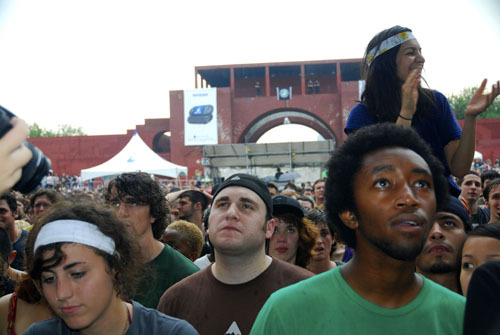 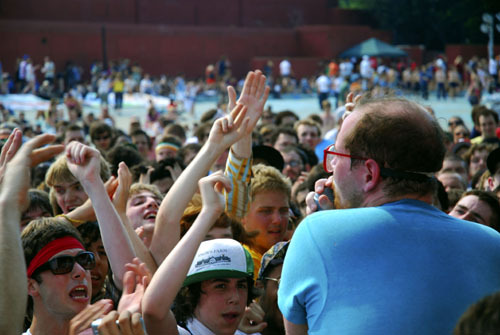 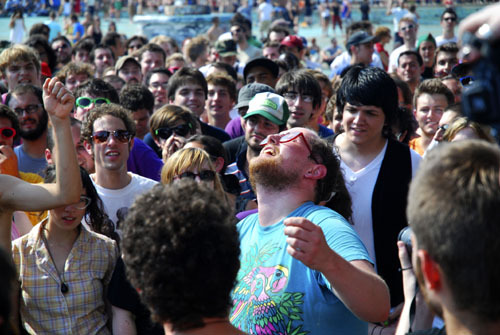 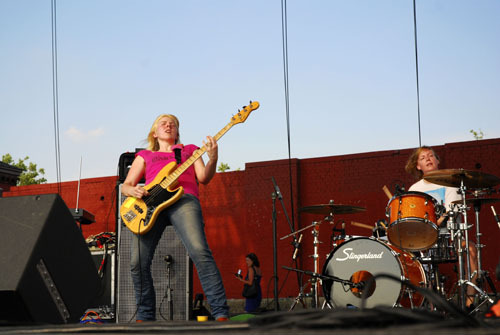 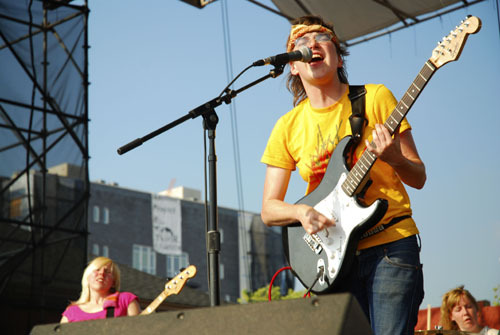 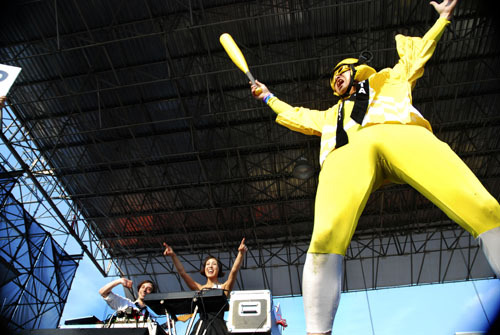 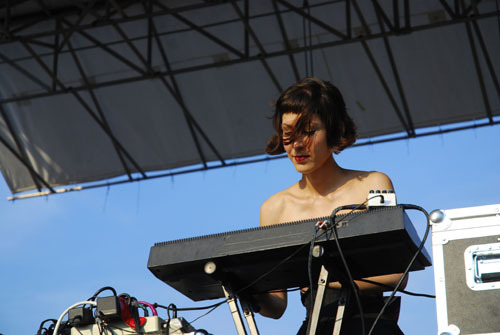 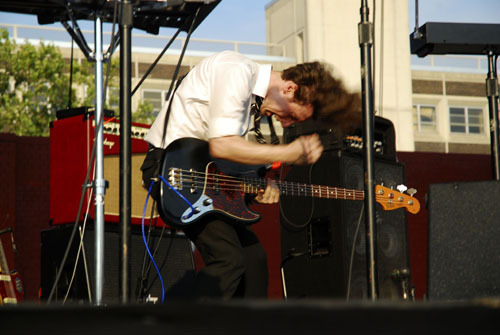 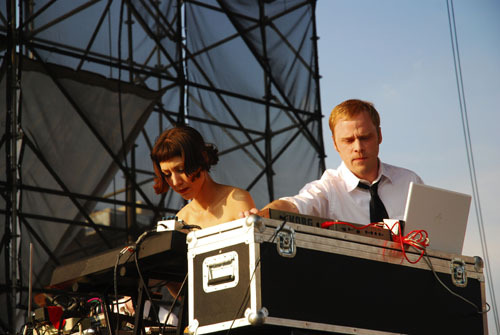 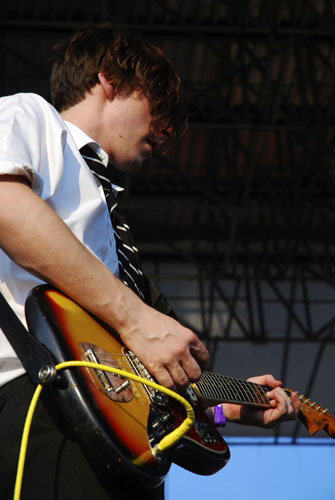 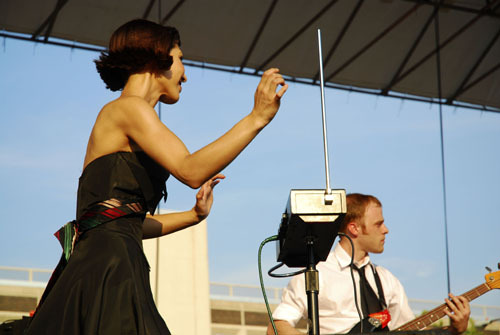 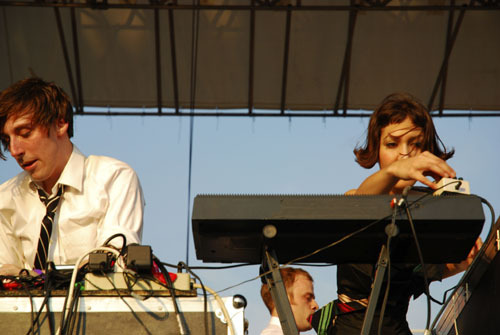 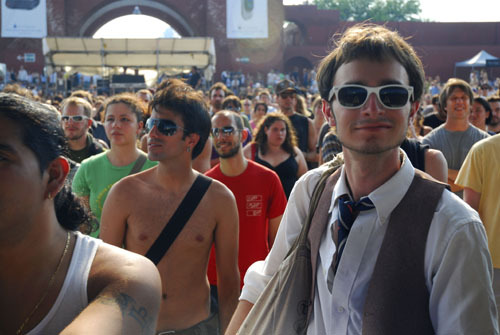