Brothers Sergio Dias and Arnaldo Baptista (keyboards and vocals) brought the group back together in 2006, playing live for the first time since 1978 at the Tropicalia exhibition at London’s Barbican Arts Centre on May 22nd. Original drummer Dinho Leme came onboard, though Rita Lee has been replaced with Zelia Duncan, who was superb at Friday’s performance. Watching Zelia and Sergio onstage together is magic. They vibe off each other’s energy, make faces at one another, dance across the stage. Zelia’s voice did not leave the crowd wanting, no matter how much they may have missed Rita. Do not be mistaken, this is no aging rock trip down nostalgia lane. Os Mutantes is as current as ever, still ecstatically shattering boundaries with their experimental, multi-dimensional pop art. In fact, it sounds better than ever.

Stomping on stage to “Don Quixote,” all horns and cymbal, Dias, Baptista and Duncan emerged as the rock soldiers they are. They plowed seamlessly through crowd favorites “Dois Mil E Um,” “Virginia,” “Minha Menina” and “Baby” while Zelia’s cover of Francoise Hardy’s “Premier Bonheur Du Jour” had wings. Mutant tongues firmly lodged in cheek, their performance of “Cantor De Mambo” was an hysterical, earnest homage to Brazil’s musical tradition – just as fresh today as it was 40 years ago. And when they closed with “Bat Macumba,” they brought the house down.

What Os Mutantes convey onstage, however, is so much more than just the music. It’s their playfulness, their sense of wonder that makes them eternally young and radical. Still improvising after all these years, Zelia conferred midway through Dias’ mind-blowing guitar solo with the background vocalists. A few head nods and an irresistibly cute thumbs-up from Zelia later, and they were melodically chanting “While my guitar gently weeps” in between Sergio’s riffs. It was just what we needed to hear. That’s the thing about Os Mutantes. With nearly half a century gone by, they know how to fill the void. 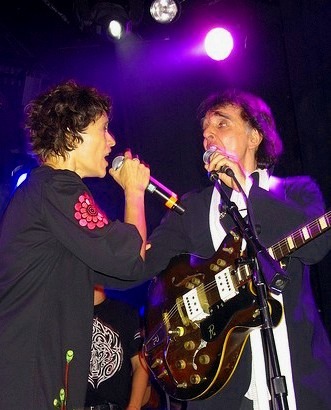