Those the Brokes – The Magic Numbers 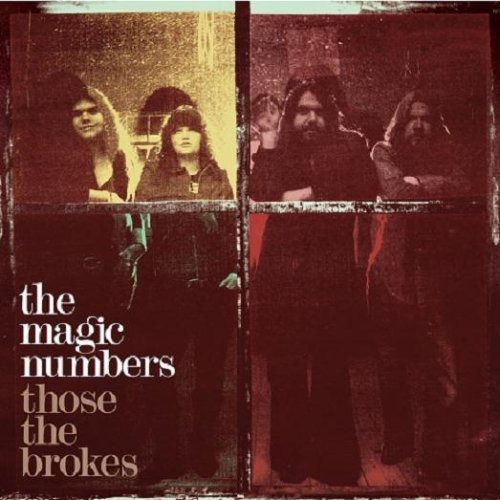 The Magic Numbers are a hit in the UK, with two top 10 albums and four top 20 singles. There, they’ve opened up for U2, Brian Wilson, The Doves and The Who. But to American eyes, The Magic Numbers remains your run of the mill shaggy haired indie rockers who could hail from Brooklyn. Well, my fellow Americans, allow me to let you in on a little secret – The Magic Numbers are fantastic and are well worth your attention.

The band is made up of a pair of brothers and sisters: Romeo (Vocals, Guitar) and Michelle (Bass) Stodart along with Sean (Drums) and Angela (Melodica, Percussion, Vocals) Gannon. I know what you’re thinking, another Wilson/Phillips kinda situation, right? The Magic Numbers make far better music than anything the aforementioned group . It’s light, breezy, sun kissed pop akin to a deeper and more upbeat Ladybug Transistor. Their sophomore album, Those The Brokes, is a deeper, catchier affair than their self-titled release. They’ve drifted away from their folky roots towards pop, which normally would cause writers like myself to flame them, but when the hook’s in this deep I’m caught.

Every song on the album plays like a hymn to summer. Even at their fastest, these tunes are porch blasters, love songs to the girl next door. I won’t make any promises, but if you put on a silky smooth jam like “Undecided” something will go down, somewhere.

With little aux percussion or melodica on the record, Angela’s role may seem a small one. But it’s her rich voice that fills in behind Romeo’s thin but equally compelling singing. Together, the two sound like Mates of State with more power, never scrimping on catchy hooks and sometimes saccharine delivery. The best point on The Brokes is the standout single “Take A Chance”.

I think the two sibling pairs work better apart. Romeo and Angela send their voices flying to the rafters, while Michelle and Sean lean back and hold down the anchor. Michelle Stodart is a wonderful and engaging bass player capable of playing with style, skill and power over a pop sound that would devour an average player. Some of my favorite moments on Those Are The Brokes come out of her amp – the rolling start/stop heartbeat of “Boy”, the oceanic rhythm section in “You’ve Never Had It”…

It may get a little tedious to the pop-haters among us, but chill against a shady tree and let the summer in. America- meet The Magic Numbers.