OS shows, at least in New York, will take any style, genre, whatever. It’s not like your average rock festival where you got all sorts of factions of rock butting heads. You’ll get bands that can’t even dream of a world which would allow some of these other bands to exist, kind of like seating Cardinal Richelieu next to a Tantric sex worker. This opens the door for rock’s well-dressed cousins and dramatic foils: people who play weddings, bar mitzvahs, jazz clubs, conservatories, etc. You know, the people who actually get paid well for gigs.

Both the bands that decided to show up for Friday night’s OS show at Blaggard’s Pub were just that sort, and have indeed played weddings (and as it turns out, both the lead singers had actually played the same wedding once). Two more bands didn’t show up at all and forfeited their spots. Who’s better off? No idea.

To be fair, Blaggard’s Pub isn’t a bad venue, as far as back-of-the-bar venues go. There’s a raised area where the bands can play, safely corralled by a wrought-iron fence. The sound is fine. Now if only the bands would show up on time.

The first band of the night started bright and early at 11pm, a full hour and a half after they were scheduled and three full hours after the first band was supposed to be on. On stage: three young girls, none of them topping five feet, even in heels. Ripped jeans, sleeves that go nowhere, visible bra straps. Even a Stevie Nicks t-shirt. The lead singer, in six inch heels and still the shortest, the smurfette-ish Chantele DiBrava, wearing a Britney skirt, Madonna gloves and enough makeup to raise the eyebrow of a drag queen. What they play? Some sort of R&B mash-up.

It’s a good thing I was drinking Guinness. Any lesser beer would probably have come back up all over the bar right then and there.

Chantele can really belt out some of them notes, and if we were going purely for a strength-of-voice/height-in-inches ratio, she’d be one of the top 12-year-old-looking singers anywhere. And yet, watching her shake around in a plaid skirt just seems all sorts of wrong. Then, she invites a friend on stage for a special birthday lap dance.

Watching a girl who looks like she’s 12 writhing on top of some smirking dude while singing “Do it to me baby” raises a whole bucket-load of moral, ethical and legal questions. Even taking pictures seemed like violating a large list of statutes. Though it did help me figure out what I want for my next birthday.

Mind you, the guy was not respecting any of the traditional lap dance rules, and his hands were all over her. If I were the bouncer he’d be out on the streets face down in a puddle of hobo-puke. Sadly, even with nobody being tossed, the lap dance was the high point of the performance.

At the end Chantele does a cover of “Mr Roboto” which isn’t so much a cover as it is putting the phrase “Domo Arigato, Mr Roboto” somewhere into an R&B song. And repeating it. They didn’t even do the robot. They did do more of the same “Cyndi Lauper on PCP” dance they’d been doing all night.

Next up is the Swing-Rock ensemble Double Down, who I’ve seen a bunch times around in bars and clubs. Double Down takes a 40s approach to music, where everything is a standard if you play it right, and tend to bang out a Sinatra tune next to a swing cover of Nirvana or Stone Temple Pilots.

Double Down played mostly originals, with some covers that defy explanation: an up-tempo swing version of Usher’s “Yeah”, a slow and incredibly creepy rendition of STP’s “Plush”, a mash-up of Motörhead’s “Ace of Spades” and “Sing Sing Sing (With a Swing)”.

At one point the sax and trumpet wandered out into the bar while playing, the trumpet lounging on the stools.

At least the night turned a little more fun, but it’s still a collective “What?” for OriginalSessions. Maybe the “original” in the title is meant to be ironic. That would be very hipster of them. 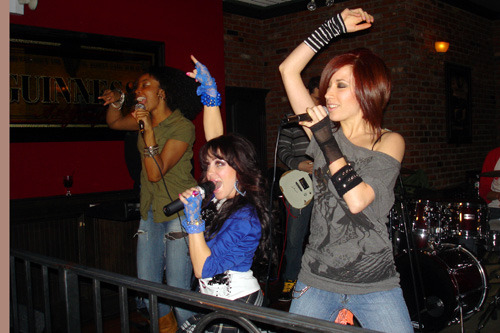 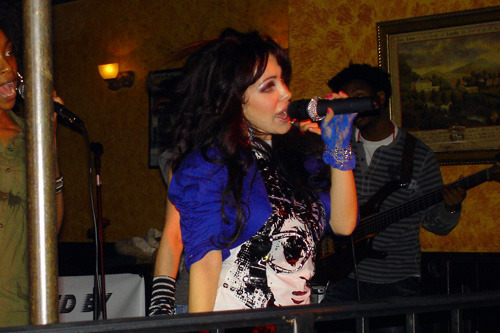 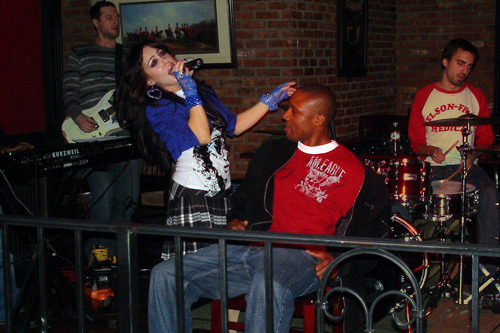 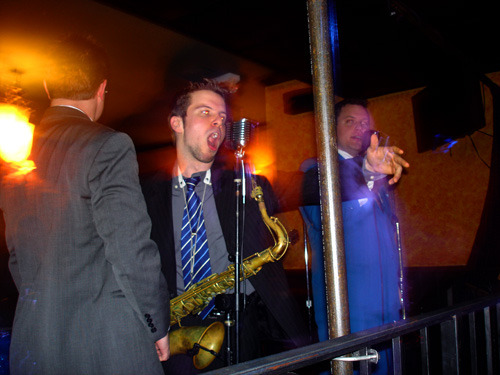 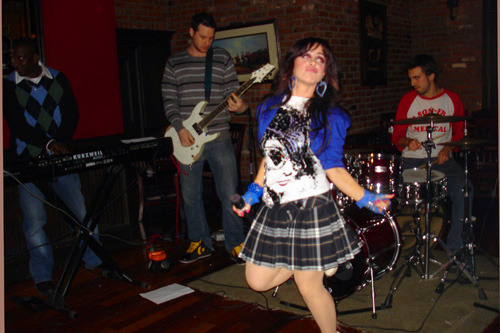