After the digital dust settled from the sampled electronic and ambient sounds of Arms and Sleepers and Helios, Slow Six took to the stage. It was already pretty dead at Hennessey’s Upstairs Rock Club, but for a Wednesday night in Boston with the Red Sox playing, this deadness is par for the course. People gathered around to see an interesting instrumental collective, that, comprised of two violins, a drummer, guitarist and keyboardist (strictly a Fender Rhodes), delivered what could only be described as otherworldly.

My expectations were high. I have been voyeuristically following this band for the past year. After an enlightening conversation with some of the band members, including frontman/artist director/founder Christopher Tignor, I thought I knew what they were all about. Well, kind of. Slow Six has one foot on the shifty shores of rock and one foot on the rocky crags of postmodern classicism. The rock roots seem to stem from Tignor’s, comment about the band’s beginnings: “I have always thought of this band as DIY. I mean, you build a loft in Brooklyn and you get people to come over because they happen to be excited for whatever reason about this, in some ways, ‘out-there’ music.” Most rock groups can empathize with this notion of doing it yourself and playing what you want to play regardless of or in response to the public consciousness.

While bands fall down that slippery slope of mass appeal, sometimes catalyzed by the big record labels, Slow Six, since its inception in 1999 released two records through New Albion, a big label in the context of contemporary classical art music. Yet, the slippery slope seems far in the horizon. Maybe this is because of the firmly placed foot in the world of postmodern classicism, which hearkens not to a certain aesthetic as much as an uncertain number of sonic possibilities that remain aloof of any genre. It may also help that the track record for New Albion tends to favor content over the net result of monetary income.

When Tignor started to talk about the Six’s aesthetic mantra, it gave me pause to think about why they were playing in a rock venue. “I think one of the things that this band has always been interested in (in many ways this is sort of part of our classical background) is a breath of either emotion or color or just going different places with the music; as opposed to delivering a focused rock band sound,” explored Tignor.

“In twenty seconds you can hear a rock band and know their sound. I think a lot of our songs intentionally explore different places, even within one song, as opposed to a song that is just an object. There is definitely breath in our music; it is something we’re good at.” Tignor further explained that “Our pieces have a development over time. They should have some effect on mental state: how you feel now, where you have been, and you are remembering the last section as a memory. How can you be here based on where you began?”

This principle of music with breath and development is what underpins the musical ideology of Slow Six. Furthermore, it is an ideology that flies in the face of the rock aesthetic, while fundamentally revering it. Although the process element of their music could be easily marginalized as a hijacking of postmodern minimalists like Reich and Riley from the classical concert music tradition, the process is still subsidiary to the musical telling and retelling of ideas. The keyboardist, Rob Collins emphasized the general sound of Slow Six. “There is a huge difference between cohesive and monochromatic and uninteresting. [The latest album] Nor’easter is diverse, but within a particular soundworld.”

As part of a promotion for Nor’easter, “These Rivers Between Us” opened up the set with an instant idea of Slow Six’s intentions: interaction and cohesiveness. Every rhythmic figure articulated seem to set in motion a development of musical material that proceeded in an arch-like form. At the apex of the music was a sustained interaction between the violinists (Christopher Tignor and Ben Lively). The simple act of pizzicato on the instruments was turned into a musical event as the sounds were altered by various pedaling presets. This moment became more interesting as Steve Griesgraber entered the fray with his guitar. It was moments like these where I realized that Slow Six isn’t really a rock band. And still, I don’t know what they are.

The longest of the set was “Clouds.” It unfolded for over fifteen minutes starting with a distant and heavily reverberating guitar tremolo, commencing with varying nuances of a simple, additive rhythm played by the violins. Near the end Tignor pulled a trick from his John Cage tool belt, grabbed a transistor radio, tuned it and placed it in front of a microphone.

The night’s treat was seeing the interactive piece “Echolalic Transitions” performed by Christopher Tignor at the keyboard with Steve Griesgraber on guitar. In real time, Tignor took various parts of Griesgraber’s part to keymap them on the keyboard in order to manipulate the sounds in real time. Although this is done often in other settings, the improvisation and interaction that took place was seamlessly natural and earnest. The music lacked virtuosity and complexity, yet the simplicity of the interaction allowed the listener to focus on the nuanced changes of texture and sound.

When the dust from the rosin cleared at the end of the show, I realized I’d been engaged and entranced through an entire set. With each song, Slow Six unfolds a story to which many voices contribute. With one foot in the shifting shores of rock and one on the aged-tundra of classicism, Slow Six are pre-occupied with creating and experiencing music as an interactive narrative bereft of any outside pretenses. It’s an earnest music that is infectious and endearing and it maintains an intellectual sensibility that neither condescends nor abandons the audience. 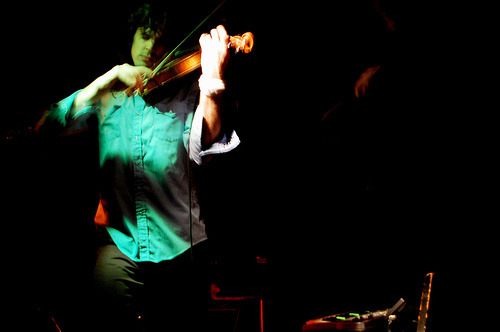