The Tossers at the Abbey Pub, Chicago

In the early 90s, cities all over North America started spitting out their respective representative Irish-punk bands. From Los Angeles came Flogging Molly, from Boston came Dropkick Murphys, while Vancouver sent The Real McKenzies. Unsurprisingly lost in the shuffle were the Chicago-based Tossers, a group of South-Siders who, despite quickly becoming a staple at undersized local venues, refused to quit their day jobs.

Fast forward a decade. Martin Scorsese is rolling to Dropkick Murphys, having featured them heavily in The Departed. Likewise, Flogging Molly is also supplying tracks for television and film, most notably 2005's Brad Pitt and Angelina Jolie vehicle, Mr And Mrs. Smith. Meanwhile, the Tossers are bussing across America, headlining the same smoky rooms, knocking down pints on stage while drunkenly asking audience members for a light.

You might call them failures – that is, if they gave a shit about making it big. Despite their increased popularity since moving to Victory Records in 2004, the Tossers still seem to exist simply to celebrate every sort of legal and semi-legal debauchery that the USA and Ireland have to offer. Yes, they've gotten more polished, while the frequency of shows ended early to band member drunkenness continue to diminish. Still, the Tossers maintain a raw edge and authenticity that will always bring both the punks and the Paddys out whenever they're back in town.

The Tossers' Friday night performance at the Abbey Pub was no different from what Chicago has grown to expect. Opened for admirably by the “Chicago-Irish” Kevin Flynn and the Avondale Ramblers (less so by the solid-yet-generic Vacancies), the Tossers–barely able to fit six on the stage–played a 90-minute set that reached back as far as 1996. Beginning with “Aye Sir”, a raucous ode to prostitutes, alcohol, and lethargy, the group embarked on a narrative that included tales of this time where he was drunk, that time where the cops fucked shit up, and the other time where that chick was probably a hooker. Lead singer Tony Duggins ferociously picked, plucked, and strummed his mandolin while singing and screaming with an Irish accent that is always curiously toned-down in his speaking voice. Rebecca Manthe burned through a good portion of the horsehair on her fiddle-bow as she played, eyes ever closed, with restrained energy. And Tony's brother Aaron was pleasantly close to on-key with the tin-whistle, mouthing the lyrics into his microphone whenever the whistle wasn't called for.

The more cynical might experience disdain listening to the closing number, 2005's “No Loot, No Booze, No Fun”, as the Tossers have just sung their dozenth song of the night about being wasted. For any other band, it might come off as shtick, but with the Tossers, one look at the stage lets you know that they are playing and singing from the bottom of their hearts. 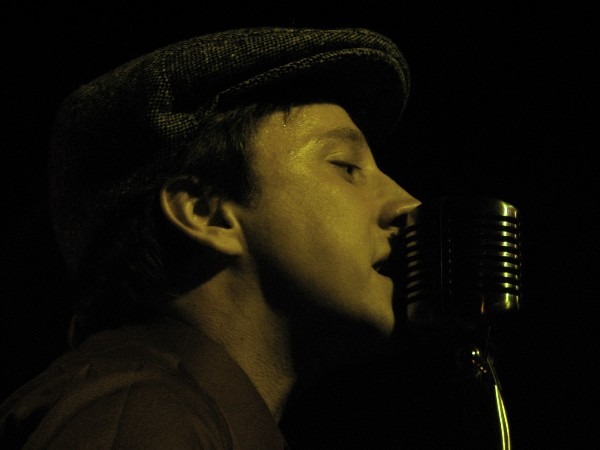