Each year seems to see Wham City reaching out and building bonds with more of the complex Baltimore art community around them. Last year, this was evident in the inclusion of long-running acts both popular (Celebration) and more obscure (leading improvisers Leprechaun Catering). This year, the biggest such shift was in location: the festival’s first night opened in the massive theater of the Baltimore Museum of Art itself, a surreal and striking acknowledgment of just how far it is possible to go just by refining strange projects into their highest forms.

Whether by peopling theater productions with fanciful costumes, or tinkering with broken up chunks of collaged video, or delivering impassioned sermons on the history of video games, all of which turned up somewhere in the extensive and varied seven hour program Friday night.

Darting down from New York on a direct bus to N. Charles Street, I arrived at the museum by 7:30 or so (after stopping by Moveable Feast, a sort of local fresh produce fast food stand in a d.i.y. geodesic dome out front, offering, among many other things, goat cheese-stuffed squash blossoms). I’d missed an afternoon of opening festivities on the museum steps, but arrived just in time for theatrical contemplations of the forces that compel writers (Connor Kizer and Adam Endres’ “Letters”) and of the pitfalls of our modern life (cartoonist Dina Kelberman’s “Sometimes”, an elegant absurdity encompassing the hazards of going to the office in costume, and Youtube). From there, the program reached in all directions. There were two striking modern classical selections, an excerpt from Steve Reich’s frantic “Drumming” performed by Brooklyn rhythm quartet So Percussion, and a Cage-like orchestration of found objects from Trockeneis.

The theater setting was well-utilized by several film selections, particularly a digested video mashup of the Beatles and the Rolling Stones by New York artist Yoshi Sodeoka, and the odd cultural vomit of Olaf Breuning’s “First”. Daniel Higgs, lead singer of long-running Dischord punk band Lungfish showed up looking like a past-century hermit and sang an extended, hymn-like a capella. Benjamin O’Brien, lurching around the stage with a bottle in hand, tried to make us aware of the dire overpopulation problems facing planet Earth. Then, filling time while Celebration set up their gear for the closing set, Dan Deacon confused and amused audience members with truncated instructions like: “Tomorrow, at Load of Fun, be sure to arrive-” and “Do not lose it. Do not fold or bend it” (“Do not lose WHAT?!” someone screamed back apparently believing they were the only ones missing the important parts). Then he launched into an improvised monologue acted out by Josh Kelberman in full harlequin attire. 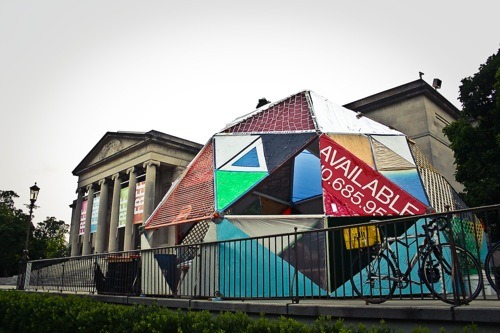 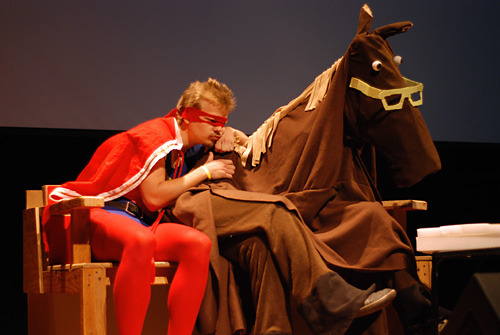 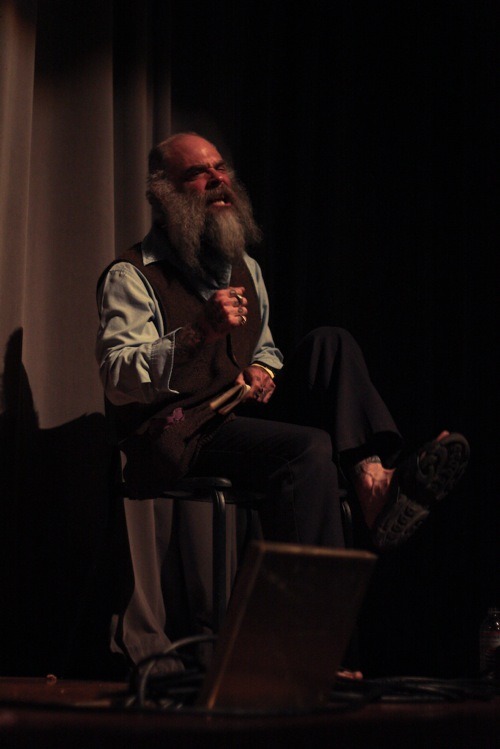 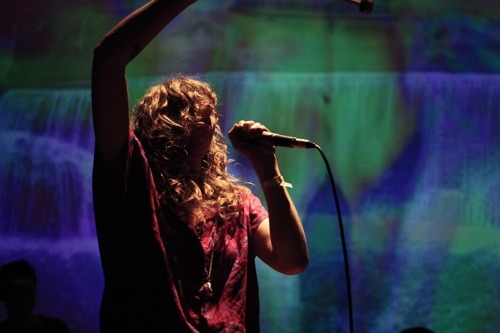 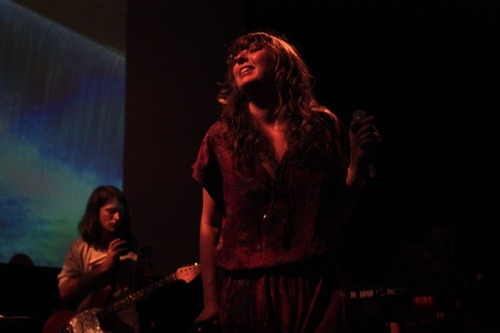 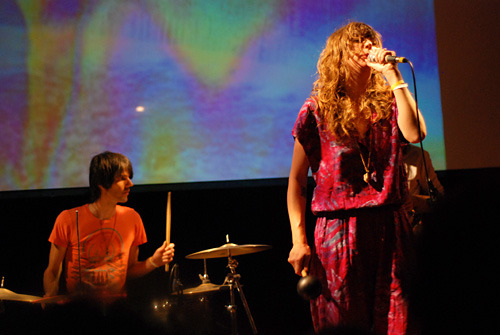 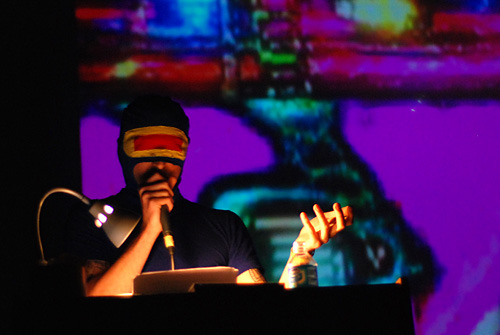 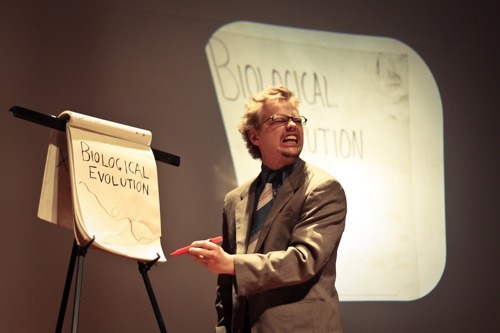 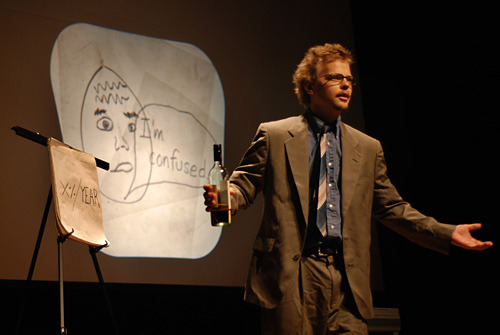 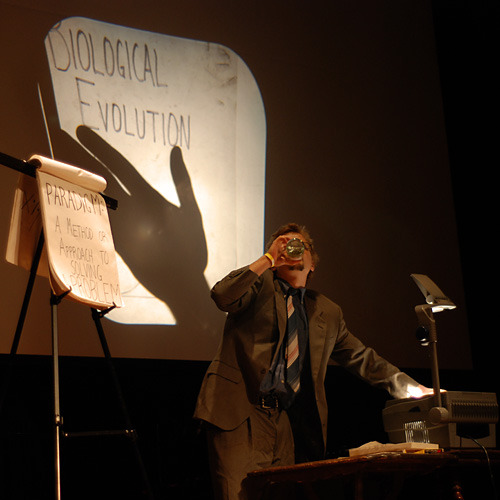 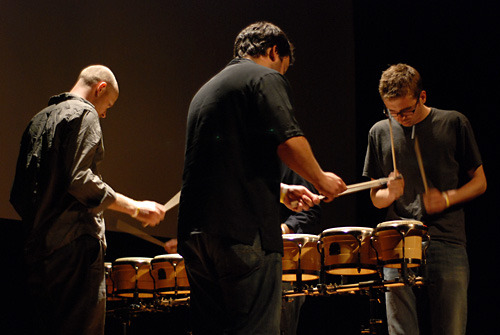 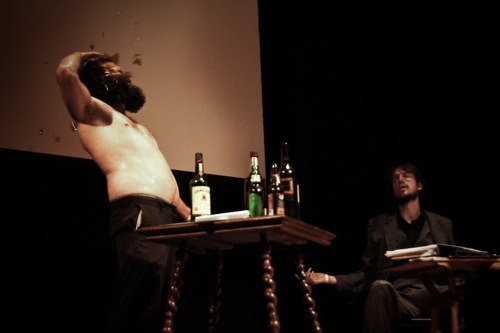 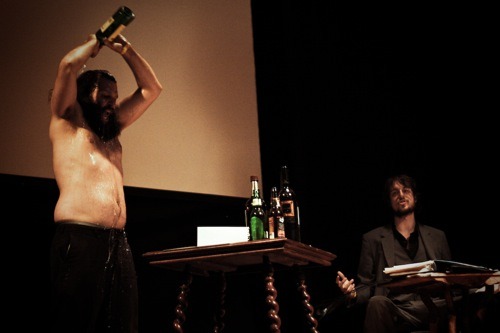 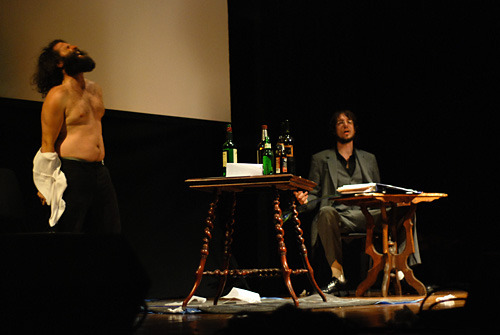 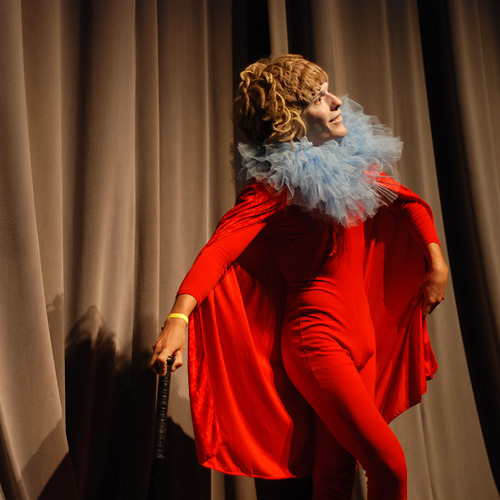 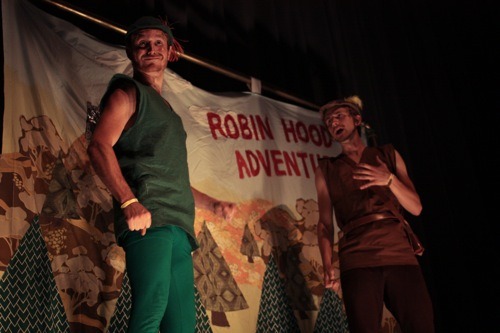 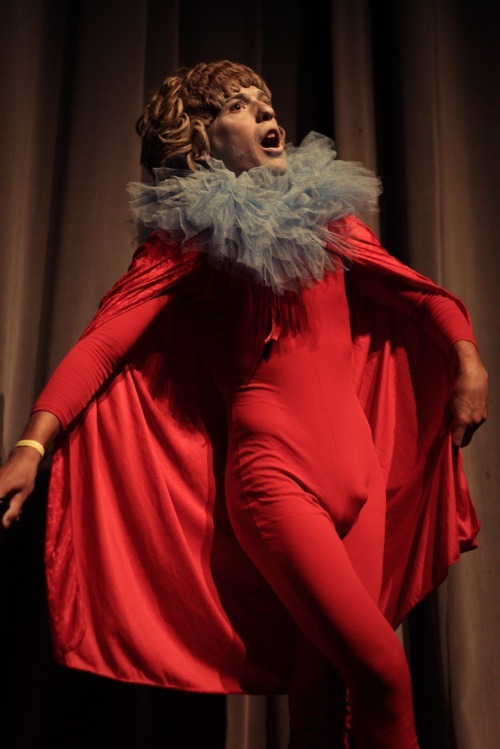