A Bird In The Opera House – Nick Jaina 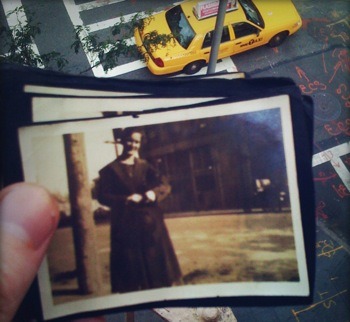 Portland man-child Nick Jaina comes on strong with his idiosyncratic brand of “alt-folk.” He wanders through several decades of mixed nuts, and he’s a colorful songwriter, but, mysteriously, this album comes out sounding generally quite middle-of-the-road.

He plays guitar, piano, bass and drums, and it’s all very Nick-centered, despite the fact that he’s joined by eleven other musicians throughout. Some critics have hailed this as dreamy and lofty, but a keener ear reveals some of it as being a little too cute and clever by half, with lofty ideals unrealized and upper-register vocalizations that hang unresolved.

Quality control is not the strong suit, as consistency is clearly lacking. Some of it just doesn’t work at all, for example, “Semoline.” But, then, again, some of it is right on, such as the smooth finger-pickin’ of “Strawberry Man,” the quality, swirling Sufjan Stevens-grade choruses and the Joseph Arthur-esque passages.

There’s an unequal balance of good and not-so-good going on here. On one hand, there’s some solid rolling drums and high-end viola playing. On the other hand, “I Don’t Believe You” is bad, and boring, and sounds like Sting doing some serious slumming. And three songs are named after cities, also boring. The desire to reference Tom Waits or John Lennon should be resisted, although Sam Beam meets Jim Beam is amusing, but, ultimately, Nick Jaina doesn’t need to ride the coattails of anyone. He has potential, but he does need to give us more of the “alt” and less of the “folk” from now on, if he wants be taken seriously.