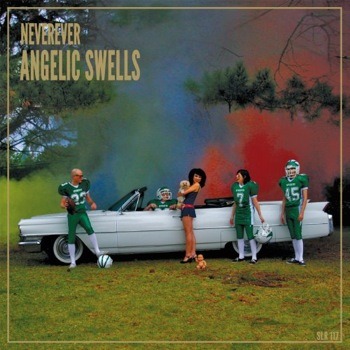 Neverever has brought the swingin’ sound of Glasgow to LA. Jihae and Wallace Meek have repackaged their Champagne Socialists garage sound with buttoned up 1950s hopes, affinities and aspirations. Their interesting yet dubious shift in quality polishes up the former’s DIY style traded in for platitude pop as well as awkward lyrics rife with faux dramatics.

The album title miffed me for a minute. Somehow I mentally regurgitated Angelic Swells as an amalgamation from the group monikers, Angelic Upstarts and Swell Maps. But oh no. Rather the group derives their sound from a second rate contemporary Glaswegian baroque familiar to the Stuart Murdoch-indoctrinated art school of twee by way of strings and the occasional well-intentioned lonely horns set to dumb 50s pop lyrics.

“Here is Always Somewhere Else” suits the album well, with a rainy day build up that unleashes some big classic American rock n’ roll at approximately 1:10 into the song. It really caught me on the third listen when I wasn’t wincing at innocuous toss-aways like “Bitch Boys” or the floundering, underwhelming finale “Underwater Ballet.” The unnecessary “Teardrop Tattoo” mixes 50s “Leader of the Pack” bravado and modern day gangland ink trends coupled with silly lyrics, “I knew you had a knife, you said I been untrue, I was about to become, your teardrop tattoo.”

The lyrical idiocy continues on “Cowboys and Indians”, a track that makes light of America’s colonial history into a weak metaphorical vehicle intended to convey a lovers’ quarrel.

Neverever's 80s alternative sounding tracks work better, like with the punk-lite “Coconut Shampoo” and the semi-earnest and immediate Plimsouls cover “Now.” But as soon as the group flirts with high fidelity seriousness and vulnerability, it comes off as contrived, like the woe-is-me fragility on “16th Wonder.” “I am unstable, like a three legged table.” Really? Something must be awry with your stability and greater songwriting sensibility when you rhyme “unstable” with the simile of a “three legged table.”

So what happened to the Champagne Socialists? Did Slumberland think that a cleaned up, proper production sheen would make them sound like the Shangri-Las? Given a glimmer of their original release of “Blue Genes,” it is unfortunate that Neverever ceased to continue their original garage quality for a bright studio tone. Their “Young and Dumb” pop would have translated better drowned under washes of grunge with the inane girl-group vocals chirping up occasionally in the mix.

Instead, the album is weighed down by its nuances, and by trying to recreate the 50s without the charm or even a believable hint of angst or rebellion. Given Jihae and Wallace’s Glaswegian connection, they should rediscover what made the post-punk-proto-twee Postcard sound so exciting and perhaps reclaim the pseudo-edge that made their Champagne Socialists project almost interesting.