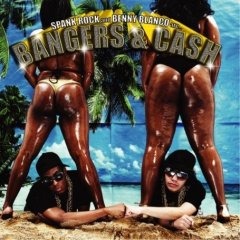 When an album opens with gongs and someone shouting “Welcome to the Fuck Shop” I know I am in for a treat. Meant to be heard at top volume, with woofers thumping like fat booties in Atlanta strip clubs, Bangers & Cash, is Spank Rock and producer Benny Blanco’s tribute to Miami bass, booty shaking, freak nasty hoe splacking, trunk rattling, pussy popping music.

Listening to this E.P. makes me curious of Blanco’s history as it sounds as though he is a student of the genre. His tracks have bass drops that hit like bitches with Barbaro hindquarters, new jack swing snare stabs, and all the signature hollers, chants and sex sounds that made Miami bass a national hit in the early 90s. Who would have thought a Jewish kid from the north could revive a style with such swagger and filth?

Spank Rock is his usual potty-mouthed self, keeping his bars simple, effective and vulgar with equally crude choruses. On “LOOSE” Spank Rock lets us know he serves phallic for the most important meal of the day and sticks it with a chorus chant of “she ain’t nothing but a hoochie mama, hood rat, hood rat hoochie mama.” The throwback slang and sampled 2 Live Crew “hey, we want some pussy” chant on “PU$$Y” drag that thump heavy sound from its sandy 1990’s grave into the new millennium of sex-crazed music.

I had no idea how much I missed raunchy as fuck hip hop, until I started listening to this record. Bangers & Cash manages to take a formula and expand upon it, unlocking an even cruder level vulgarity — First Amendment bitches. In fact, Spank and Blanco are so skilled at the kinky nasty bass style, it feels as though all style originators are tame in comparison. My only hope is that I can hear these songs performed in a live setting and truly witness what raunch music can drive bass fiending bitties to do with their derrieres.