Below The Heavens – Blu & Exile 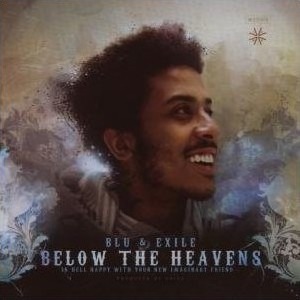 We are in a time where, more than ever, rappers dislocate themselves from the people they are speaking to. Hip hop has become something only the privileged can celebrate. If you cannot pop bottles, be in the presence of models, and change whips with the seasons, then the music is rarely speaking to you. The music is still a strong as it ever was, but the content has lost itself in glitz and glam of affluent problems. Kanye’s dropout past is no longer relevant. Common cannot find his people anymore, even if he keeps his music videos in the streets and basements. Even Rhymefest tried to pass off as a blue collar man, but we all know who wrote “Jesus Walks.”

It may seem as though I am strictly picking on Chicago, but as of late it’s been the city that’s claimed to keep it real for normal people. Blu marks a changing of the guard, because the truth is, we are not all going to win the lottery. Most of us are going to hover somewhere below the heavens, and that is where Blu meets us.

His message often comes at the price of spirituality, but it’s a call for the cleansing of our soul-vibes and not anyone’s faith. Even if spirituality is not your cup of tea, Exile’s heavy beats prove it might be too soon to leave soul behind for electronic samples. Icebreaker “My World Is Blue” bursts the record wide open with an energetic cello, hand claps, and a strained voice proclaiming “my world is blue.” “Soul Amazing Steel Blazing” slows it down, but still keeps the drums thumping over a twinkling piano sample and, just for contrast purposes, a scratch by Lil’ Fame of M.O.P. In fact, this record should be heard simply for the rewind worthy DJ work, where “Soul Amazing” gets shortened to an ode to the creators with a “zin zin zin” cut up that would make Bambataa smile.

Coincidentally, Blu and Kanye both dropped a “Good Life” song this year. Ye’s version has him standing on top looking back, while Blu’s is somewhere in the middle, with his head on a swivel. Blu’s version begins with him talking over the beat, asking the track to show him the houses, money and whips that ought to take him to the good life and the girls presumably included there. Complementing this sentiment, Exile drops a hopeful sampled vocal of “Show Me the Good Life” and Aloe Blacc throws down a guest spot. Once Blu & Exile keep a firm foot holding the door open to the people he raps for.

If anything, Blu proves his grounded mentality by never betraying his personality or reaching for material that is out of his perspective. His verses are tightly knit, with tongue twisters that rarely waste words or stray from the message. There are no attempts for club records or street hits because as Blu states “it’s hard enough trying to tell my folks this flow ain’t easy.”

If this review has not convinced that this record is worth a listen, head to myspace.com/bluroc and listen to the entire album on stream.