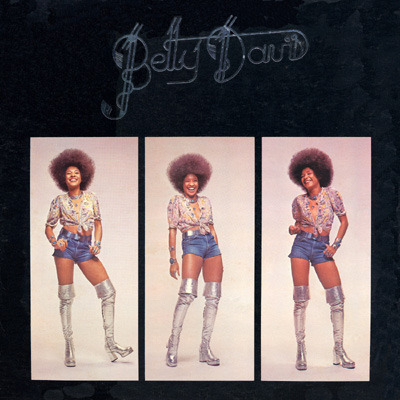 Betty Davis is the real thing. Her hard-as-steel exoskeleton and lusciously sexual inner core have been many times imitated and, you guessed it, never duplicated. Those who, like me, grew up idolizing artists like Mary J. Blige, Faith Evans, and Salt N Pepa–women who flew slightly below the shiny pop orbit and universal appeal of the Whitneys and Mariahs–will put this record on and find themselves nodding in recognition and appreciation. If those hard-edged urban-pop goddesses didn’t grow up listening to Betty, they surely grew up listening to someone who listened to Betty.

Before Betty decided to make music of her own, she accomplished more creatively than most artists who infest today’s Billboard charts will in their entire career. She wrote tracks for The Chambers Brothers and The Commodores and introduced two music legends, Miles Davis (to whom Betty was married for a year) and Jimi Hendrix. That friendship resulted in the birth of fusion music. Furthermore, it’s widely believed that Betty herself inspired Miles’ most groundbreaking album, “Bitches Brew.”

When Betty did start making her own music, there was nothing pop about it. Her style was hard, dirty, DIY funk with a little blues, rock, and disco on the side. She wasn’t blessed with an angelic voice, but what she lacked in natural talent she made up for in heart and raw innovation. Betty’s voice morphed from growl to hiss to whispered moan to throaty seduction to whine, and it always suited the message of the track. Betty, of course, wrote all of her own songs and they all evoked the spirit of a woman who knows she has the right to a good man and a good time. The titles of her songs say almost all they need to say. “If I’m in Luck I Might Get Picked Up” shows an assertive woman proclaiming “This is my night out!” over a slow groove with thrusting guitars. Girlfriend is out to get what’s hers… or not hers. In “Your Man My Man,” Betty conveys the other woman, layering her surly, sensual purr over some intense wah pedal action and concluding with a deliciously catty girlfight skit.

I haven’t even mentioned Betty’s formidable aesthetic yet. On the cover for her 1973 self-titled LP, the one-time model is rocking purple hot pants, thigh-high silver platform boots, and the most gloriously self-assured afro. Her 1974 album They Say I’m Different shows Betty as a space-age huntress in fur-trimmed ankle boots and a metallic, high-collared leotard.

If it’s not clear by now, I love Betty Davis. She is the true epitome of an independent woman – sexually confident, luminously gorgeous, brazenly verbose, iconically fashionable. But this ain’t no pink glittery “Girl Power” shit. A bunch of dudes could get together for some Seven Card Stud, slide on Betty Davis, and not feel even slightly emasculated by her snarling grooves. …Who is this Beyonce, again?