Beyond The Sea – Monster Rally 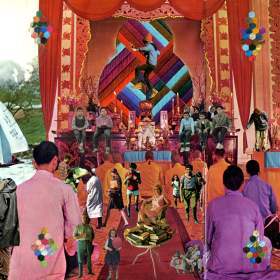 Over the last two years, Ted Feighan, aka Monster Rally, has been doing his due-diligence in keeping up with the times; the rate at which an up-coming artist must produce in order to keep a vibrant pulse in a pasture caked with mold, blossoms, and consistent irrigation. It is with this understanding that Feighan has managed to not only graduate from The Ohio State University in the process, but release his sixth (excluding Coral II: The Remixes), self-produced collection of meshed all-world beats from the far side of yesterday.

By sticking true to his passions of sample, paste, and crackle, Feighan brings us his second proper full-length not only indicative of his past works, but beyond the constraints of being the next atypical beatsmith. While it might sound as though he still has a hope for someone like MF Doom to grace his tracks vocally, Beyond the Sea ushers in a style outside the lines of collaboration and inside the lines of ownership–despite his neglect for the attribution of ambiguous authorship in the sampled materials.

Feighan's latest brings a sense of scene and delivery that are more in tune, more deliberate, yet less formulaic than his past efforts. There’s a fluidity that may have been drawn from his collaboration with RUMTUM earlier this year on MR&RT that instigated his style to pulse and prosper in areas that the scattered-brained releases of his heros only vacationed in. It’s how the tracks run together despite their ends. It’s like the threads drifting in the surf unnaturally reconnect to continue the signal resonating through the boundaries and dimensions of their existence. He’s not manipulating the worlds of Polynesia, Oceania, and the all encompassing Exotica, he’s recreating them with his cache of Legos and hip-hop blueprints–traded, bought, and stolen.

The gems are built up on Beyond the Sea by their counterparts. “Lava Flows” kicks off with a flourish of swell and crash that’s only been heard from contemporary mesh artist Junk Culture on his first outing, West Coast. With ephemeral smooth groove segues like “Black” and “Waltz,” Feighan’s able to setup the best, straight on static-knit uppercuts “Honey” and “Blame.” But, where his talent really shines is on the pay-off of “Animals.” What starts out as a hyperactive play on a steel drum progression leads into the emotional drop Monster Rally imbedded in our heads with the track “Land Ho/Masasu” off Coral. When the hyphy nature of the first half of the track fades we are lulled into a lullaby of crackle, awe, space, with the continuity of the steel drum provided in a softer, romantic tone sinking the body further and further away from the reality of conscious action. Limbo reels, and cartwheels of Feighan’s bass muscle tread over relaxed drops of haze and psych throughout the rest of the LP as if we’ve already been stamped, processed, and herded into the sea beyond the stretches of the Color Sky, the Coral, and the Deep Sea.

James Leyland Kirby, aka The Caretaker (and a slew of different monikers) and Ted Feighan sit atop the throne of modern vintage mashers. Whether you dig or not is your doing, your deal. Either you’re in or out. But know this, Monster Rally is in the vein of the Now. While the journey is very much alive, it’s exciting to speculate as to where the destination is and who will accompany him on the way.