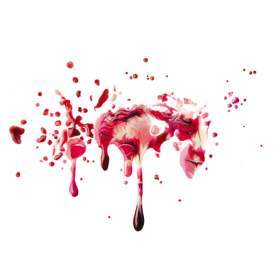 Despite Test House's surface level affinity for goth-tinged New Wave, the NY duo seem intent on avoiding a lot of trappings that can make darkwave such a drag. While using a well-worn template of melodic synth-driven dance pop, Test House's debut Bitemarks often opts to revisit a less-travelled path through 80s nostalgia.

Much of the EP explores an era of synth pop emerging from the darkness, an interesting crossroads where the gloom began to give way to a sense of light self-awareness and whimsy, more akin to Pet Shop Boys rather than Depeche Mode. Sonically, Bitemarks stays true to their influences using a similar palette of cosmic synthwork but it also leans on the linear structures and rhythmic pulse of Chicago House, early Techno, and 80s R&B to provide structure and motion. While Test House's debut does not break any new ground in any of the genres it could loosely fit into, it is an intriguing collection of revisionist 80s dance pop that fares best when they are aim their sights for the dance floor.

The taut computer funk of opener “All Over You” sets the tone exploding with melodies and synthesizer gymnastics that would have you imagine Yellow Magic Orchestra soundtracking the 1984 Olympics (that actually happened eventually but in the 90s). The instrumental's melodic, almost whistling, whimsy is grounded by a snap tight beat and arpeggiated drive. Things get deeper on the second track “My Ocean” when big house piano chords rub up against raw drum tracks, introducing an element of sticky romantic pop into the fold, hitting that sweet spot between body music and pop music.

It's when Test House deviates from the mission of making you move that things tend to get a little more shaky. Cloaked in dark vibes, their most overtly pop song with clear verse-chorus structure “Love Is Not Enough” contains a chorus that crashes into the song with a cringe-inducing lovesick earnestness that almost derails it. While the track has its moments, the structure imposed upon it comes off as blocky and the sentiment too saccharine. The next instrumental, and title track, “Bitemarks” doesn't quite hit the mark either. Seemingly intended for the club, the 4/4 drums quickly loop into nowhere, falling too flat to keep up with the overly busy, funky synth riffing. None of the EPs low points are terribly offensive, but after repeated listens I found myself reaching for the skip button. Repeatedly.

Fortunately, Test House get their groove back gloriously crossing the EP's finish line with “Island”, a triumphant workout teeming with sleek funk and easy hooks. There's a sense of space within the synth-pop elements and meticulous attention to the loop-y house drum track when combined recalls the best work of Junior Boys with less crooning and more dancing. While every other track on Bitemarks sounds like it could have come straight from the mid 80s, this is the one track that turns it back on the past, potentially stumbling across something new and leaving the future wide open for Test House.