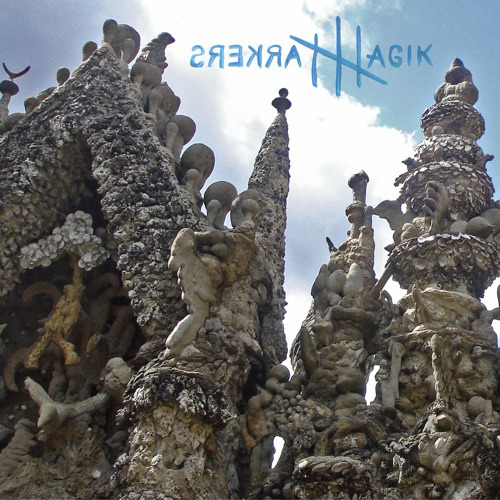 Since 2001, Magik Markers have issued somewhere around 10 releases on labels and a lot more CD-R's since their formation in Hartford, CT. That is a creative output that teeters Boolean between prolificacy and a musical form of graphomania. Their last proper record, 2007's Boss, was released on Thurston Moore's Ecstatic Peace label.

This foreknowledge prejudiced me going in for a first listen to this year's Drag City release Magik Markers' Balf Quarry. On first play-through I was hearing Sonic Youth redux all over this record. I heard “Bull in the Heather” in the off-kilter guitar pling-plinging of “Psychosomatic.” I heard “Titanium Exposé” in the unbroken electric guitar thrum of “Jerks” and “The Lighter Side of… Hippies.” Why wouldn't I? In addition to having had a record come out on Thurston Moore's label, the band is storied with the fact that that same record was produced by Sonic Youth's Lee Ranaldo. They even toured with Sonic Youth in 2004.

This is why I listen to things more than once. First impressions may be important (they may even carry some merit), but they may also mean you keep yourself from hearing things that you weren't already prepared to hear.

There exist reviews upon reviews of Boss that, by dint of constant mention, indirectly lament the Magik Markers' departure from unstructured psychedelic noise toward the embrace of more traditional song structures. This is going to color my commentary for some, but noodly psychedelic noise isn't the oeuvre I would ask a cruel god to strand me and a sweet Onkyo hi-fi on a desert island with. Therefore, I can't see how tightening up would be a bad thing.

That said, to say that Boss was bereft of a noisy dissipation into the upper attics of the freak estate is bats. Absolutely no one was going to have to tape their draft card back together if they admitted to liking this record.

The same rule applies to Balf Quarry. All signs indicate that with each new record, Magik Markers aren't leaving something behind to take on deeper production and varied (if more recognizable) song structure, they're getting better. Most notably, singer Elisa Ambrogio's voice (Part Grace Slick, and is that a small part Kate Bush in the lower register?) has found its place in the mix. Audible enough that the listener can hear its affect, it is yet usually comfortably nestled amongst the instruments instead of exposed at the front of stage before them as seemed to happen on Boss.

What's more, there is new noise on this record I can really get behind. “Jerks” and “The Lighter Side of… Hippies”, mentioned above, step way outside of the dimly-lit room the duo keeps at the Morrisson Hotel. “Lighter Side” embarks on a caustic, distorted screed against the commodified peace and love that has, in the years since the 60s era of psychedelia, yielded anything but. “Jerks” is Ambrogio in a race against her own lyricism to scream out the lyrics before the moment gets away.

This record is a disambiguation of who the band thinks they are. On this outing they adopt some more recognizable blues and punk song structures, but they keep a tight handle on their grip-losing sound.