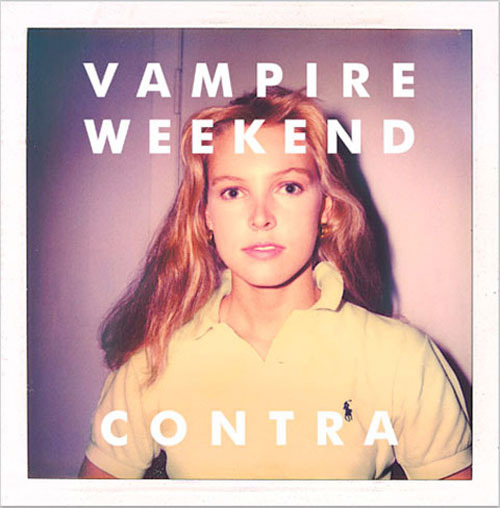 You probably decided on Contra
before hearing a note.

If already a fan, the incredibly viral 34-minute
Vampire Weekend debut predisposed a love for whatever was going to come
next. If a hater, you’ve likely read Village Voice’s Julianne Shepherd’s damning indictment of VW’s
very raison d’etre, which is apparently
to hold up “old-guard high society”. If simply indifferent or undecided,
you might have dug “A-Punk” but generally think their fan-club is
reserved for Wes Anderson-loving yuppies. Contra
won’t transcend the preordained opinions that have already polarized
the music community. After all, the classist signifiers from the debut
persist: modern art, lexicons, aristocrats, private schools, joint-smoking,
skiing in the alps, diplomats. Even if you think VW’s prep-school
snobbery reputation is undeserved, it’s not hard to see where Contra
will incense particular critics. But there’s nothing Vampire Weekend
or frontman Ezra Koenig can or will do about this; their accomplished
and branded sound is here to stay. They may divide critics, but they’re
sure as hell not going to change for you, Shepherd. “You’re not
a victim,” Koenig fittingly mentions on “Taxi Cab”, “but neither
am I.”

The tones remain clean, the melodies
still sparse, and the aura still breezy–though not a departure from
the debut, Contra is a deepening of their
sound. The hyperactive, guitar-oriented pop jams are less pronounced
(“Cousins”, notably excepted) in favor of a richer and textured
sound. Conceptually, it’s much more considered than its predecessor–there’s less flippancy and more sobriety and sentimentality on
this record. Though not a political-anthem, “Holiday” directly references
one of Koenig’s relatives who stopped eating after the U.S. invaded
Iraq. “Giving Up the Gun” is energetic but is underscored by obvious
reservations in its words. “Taxi Cab” is notably down-tempo, elusively
addressing a lacking relationship. Koenig has always been an opaque
lyricist, but there’s a feeling this record’s content is more personal
than Ivy campuses, Luis Vuitton purses, and sophomore girls. It’s
not all serious though; live-favorite “White Sky” is a buoyant summer
jam that’s been perfect since it debuted at the CD-release show at
the Bowery Ballroom in January ‘08, and its studio version keeps the
same prepubescent “ooohhh’s!” and yelping “hey’s!” that
initially made it irresistible. And “Cousins” is pure thrash-pop
with Christopher Tomson’s most frenetic drumming.

Album closer “I Think UR A Contra”
shows VW at their most versatile; a full-on ballad pacing along delicately
with each member contributing shrewdly and Koenig’s most confessional
lyrics. “I had a feeling once/ that you and I/ could tell each other
everything,” it’s the most simple and elegant they’ve ever sounded.

You have to hand it to them; for a
band with about 40-minutes of officially released material (pre-Contra),
they polarized critics and fans by being cordial and well-dressed. For
some, they’ll always just be Lacoste-loving, scarf-brandishing, Chaucer-experts.
But critically, the perfunctory dismissal of VW because they’re privileged
will eventually fade, and those still clinging to that notion will be
busy eating sour grapes.