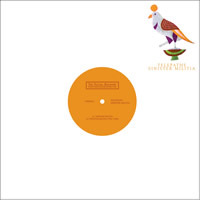 Freshly registered, Telepathe come howling out the stable-door with a fistful of clattering, saddlebags crammed with attitude. Title track, “Sinister Militia” is a slice of dissonant art-punk. Some messy pots-and-pans-style drumming, some wolfish howling, and a guitar line that creeps up and down the harmonic minor scale with the furtive stealth of a Turkish assassin. Who the militia are is never quite made clear, which only adds to the sense of menace. Is it the band? Maybe it's you? Maybe it's all of us? Maybe we are all our own militia? Whoever they are, they are on their way, which is quite frightening. At least for a minute and a half or so. But then the track adamantly refuses to develop, the dread kind of fizzles out and you start looking at your watch.

There follows a very boring tribal-house remix by TMJ from !!! It's basically “Sinister Militia” with all the menace sucked out of it, repeated over and over again. The pots and pans are removed and replaced with bongos, the guitar side-lined to make way for a horrible sub-Goa trance pseudo-ethnic synth-line. Add some whooshy effects and some overly clappy drum-programming and there you have it.

More salubrious fare on “Islands”. “Trapped on an island, You said you couldn’t swim”, they sing. The claustrophobia of island-dwelling is captured by striking use of the tri-tone, or augmented fourth, or diabolus in musica, as the early Protestant church would have it, whilst the waves menace at the shoreline in the form of rippling tom-toms and a ghostly piano. The phrase has a pleasingly oceanic heave to it and is repeated several times. All of a sudden, a flighty psychedelic jam bursts out of the unnerving quiet. The drummer clearly has a great time here, drumming furiously on what sounds like Tupperware boxes, while the guitarist pirouettes over the top with a somehow broad yet fiddling descending scale motif.

Finally, the Soft Pink Truth remix of “Islands” contributes far and away the most interesting piece of music to this release. It starts like a Def Leppard record, power-guitars amped-up to eleven, then breaks into the vocal from the beginning of the song, only it's been harmonised with a de-tuned version of itself, to render it wonderfully dissonant. There’s a bit of banging, bonging, clicking and whirring – executed with a Xenakis-esque sense of the glory of precise chaos – and even, an awesome organ solo.