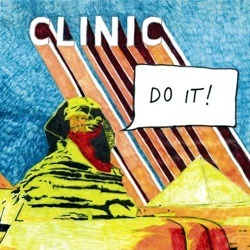 Clinic have never been the most commercially accessible band. Their brand of four-on-the-floor, teeth clench, stomp rock has always been a bit jarring. Even their most tranquil dub-inspired tapestries contain enough grit to stir up punk agitation and angst. It's both the source of their appeal, and a point of distaste for some. I for one am not put off by the medicine of these top hat wearing, surgical mask toting Brits. I like to imagine their music as an integral part of a lifestyle that includes vintage equipment-hunts through the flea markets of their hometown in Liverpool, and regular experiments on small animals.

With each album, Clinic has really only varied the slightest of things: even though the song writing takes different shapes and forms, the sound maintains its principal characteristics. That being said, Do It! represents more of an evolution than a departure from previous records. While previous records have flirted with a variety of musical styles (dub, punk, garage rock, classic rock, Motown, etc.) Do It! owes a substantial debt to doo wop, which seems to work really well on tracks like “Free Not Free”, “Emotions”, and “Coda”. “Free Not Free” focuses on Ade Blackburn’s vocals while the band rides the wave of Hartley’s tremolo-drenched guitar. “Emotions” continues in a similar vein as “Free Not Free”, smoothing out the rough edges Clinic is known for, and creating what may be the easiest song to sing along to since “Distortions”. Don’t worry, even though there are moments tranquility on this album, songs like “Shopping Bag” bring out the ferocious fuzzed out guitars and garage punk tendencies many of the other tracks lack.

Even though this album is truly a mixed bag, of genres and sounds, the end result is surprisingly cohesive. Most Clinic albums tend to have a common thread throughout, encompassing a variety of different production techniques and variations on the basic instrumentation of drums, bass, guitar, organ, and melodica. Despite flirting with mainstream success throughout the years with tours opening up for Radiohead, Arcade Fire, and The Flaming Lips, Clinic have never received the level of attention they deserve. Blame it on the surgery.