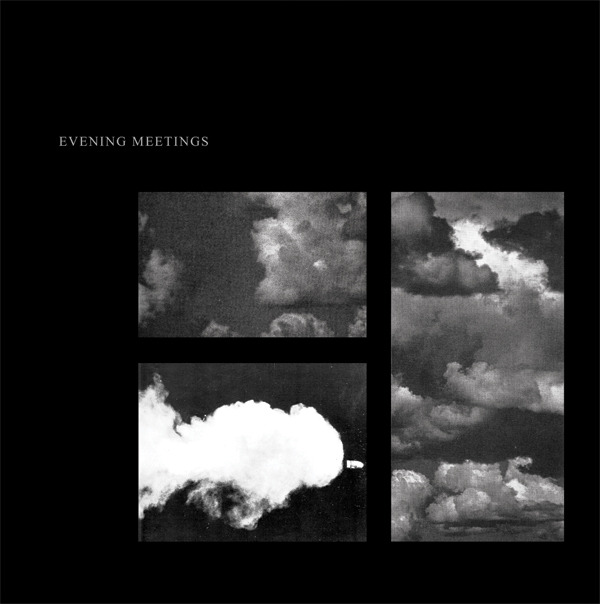 In September, Ty Segall, The Oh Sees and K-Holes sold out The Well in Bushwick, a veritable stadium-esque venue (long lines, overpriced beer, vendors, etc.) with a purported 2000-person capacity. It was the East Coast genuflecting before the West coast sound, acknowledging it for the American music staple it is. It got me to thinking about the nature of media coverage of the underground scenes and just how shallow it is. The Internet has opened channels for bands everywhere, but the inundation of content pulls back our ability to pull in our focus. Noteworthy releases can easily slip by people who would otherwise be fans. It is so easy to miss out on great regional scene happenings. Don’t read me wrong; I love Ty and Thee Oh Sees, those guys are prolific and amazing, but it feels wrong that a band with Evening Meetings’ collective credentials requires an introduction. Different cities, sure, but the scenes' (and the bands’) connections are undeniable both in their mutual influence and general contemporary status.

Evening Meetings’ members have all had their hand in guiding the last ten years of the growing experimental West Coast garage/ noise sound in bands like A Frames, AFCGT, Intelligence, Yves/Son/Ace, Le Sang Song, The Dipers, and Love Tan. That experience compounds on the band’s self-titled LP out on Sweet Rot Records. You can just feel that these guys have all played together before in various lineups and combinations, a reason perhaps to distinguish them from the typical overhyped, under rehearsed “super-group.” The album hits like a shot of mid-shelf whiskey, a tense yet smooth explosion of psychedelic anxiety being flung off the band’s shoulders. Evening Meetings channels a distinctively weathered yet polished Seattle garage sound that spans a wide range of dark- tinted rock that includes heavy blues-tones, psych-rock repetition, and a surf cadence, all channeled through a dissonant noise-punk lens.

Meetings’ self-titled is a cohesive, self-aware record that avoids the pitfalls of being over-confident or stupidly complex. A veteran-like swagger is there, but the album provides an honest portrayal of living in the city, fighting insecurity, not wanting to give a fuck, but ultimately giving one and being depressed about it all. But it’s not just in the lyrics; the whole band twists, whispers, shrieks and punches right in step with the album’s self explorative musings. It's not an unfamiliar territory, but something about the often smartly worded lyrics, the balance of the playful, yet unaffected vocal delivery and off-kilter chaos of the instrumentation that make the album’s attitude convincing both in its head nodding satisfaction and in its uncomfortable, arching bug outs (of which there are plenty).

One of the album’s best, on “Merry Go Round” plunges into a full- bodied descent, taking the listener into a darker adrenaline induced tone unlike any other on the album. When the band screams “Breathe in, breathe out” and the song drops into a panic attack and the whole band embodies a self-induced manic angst. It compounds with songs like “Shimmer Street” a self-questioning song about stress and self-improvement that avoids despondency in its slick dark defiance. That’s a major strength on Evening Meetings, the honest lyrical moments all build to summits of tension that ultimately resolve in a layer of dark rock catharsis. (Yeah, rock catharsis. What are you gonna do about?) Even the album’s slower moments like the minimalist “Hit Me,” are graced with a certain level of awkward surf momentum that lends to the cohesiveness of the looming Evening Meetings aesthetic. The forward push of the album hurtles towards the album’s most hypnotic track, “Love & Money,” which blends soft and hard, pushing quirk with a weight that doesn’t feel far off from a spaced out Zeppelin track that leaves the album in a fiercely contained growl. It’s also seems to bridge a bit of the stylistic gap between the LP and Evening Meetings’ more experimental, less riff driven, Forgotten In Seconds b/w Hello Evening 7” from earlier in the year. Temporally, a few of the songs on the LP are fine tuned versions of some longer-standing Evening Meetings songs, the recordings of which are still on the band’s MySpace. Still, the compared to those early recordings and the 7”, this year’s LP feels louder, faster and yes—more classic.

It all fits nicely in the scheme of the underground Seattle, and for that matter, West Coast sound without sounding derivative or boring. The band manages to maintain their explorative strangeness without being inaccessible or branded with the divisive label lo-fi. Evening Meetings bury their pop sensibility deeper than San Franciscan artists like Ty Segall or even Thee Oh Sees with a murky catchiness and still manage to bounce with a similar staggered fury. Given the amazing scene that is the band-members’ background, its not really all that surprising this album is so distinctively voiced. Yet, like I said, a super-group label unaccompanied by an asterisk or caveat would be misleading as it would imply the disappointment that has been almost every super-group since… well, ever. This is not that band, this is not that album, and it’s a shame they weren’t at the The Well to prove it to you.