Everything In Parallel – Buildings 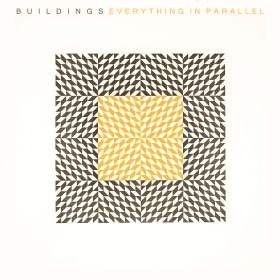 I'm not sure if anyone still cares what punk means. That precious four-lettered word has grown to such vast proportions that you can't even notice it– it's mist in the air, God, “the force” or some shit. Its elusive ethos has manifested a particularly spiritual form in D.C., a city whose musical reputation is forever indebted to that mythical thing. A lot of the punks who went to 930 Club when it was still on F Street have kids and jobs now, but never let that hyperactive kid bouncing around inside completely die, still maintaining an avid belief in grassroots motion, youth, and change.

Upon first listening to Buildings' debut full-length, Everything in Parallel, it had eluded me just how special this unintentional sacrifice to the great punk forefathers really is. There was something raucous and reckless about their construction work, but its raw athletics formed an elegant geometry too refined for textbook punk. The dynamic depth and orchestral drama of this very economic and trusting trio almost fooled me into filing their sound under instrumental post-rock and calling it a day, but with a bit of patience and immersion, what was at first one deft performance was revealed to be a blueprint for a progressive, optimistic, and refreshing sci-fi acid trip.

Joe Warminsky touched on this in his review for the Washington City Paper, and I'd agree that it's a vital part of Buildings' identity: the future as a time of possibility rather than of inevitability. It's a message that successfully blends intelligence and idealism, and is delivered through design rather than through lyric while the world predicts possible apocalypses. The serene beginnings of the track that's perfectly titled for my thesis, “Everything is Possible,” transform logically from melodic exclamations to hyperactive phasing in a fit of affirmation. The joyous counterpoint between guitarist Collin Crowe and bassist Nick McCarthy in “Zyklus” soars fluidly as though their combined efforts are leaving them levitating; two scientists hard at work, neither one stepping on the other's toes as they tag-team a quasi-house aside that morphs into drummer boy snare rolls from madman David Rich. After cycling through their experiments and proving their hypothesis with a celebratory recapitulation of the opening section, there's nothing left for them to do but float in heaven for a few seconds and cool down until the end.

It's the sonic equivalent of, “let's go to space and learn everything…don't worry, we can't die because we are space,” a strange foil for The Psychic Paramount's “let's go to space because it's one freaky place.” Somewhere between Neu!'s propulsive drum grooves, Ecstatic Sunshine's guitar loop onslaughts, and Clint Conley's “my-bass-is-a-guitar” harmonies lay brewing an alternative to New Age where the drones are a mosaic of a thousand manically mathematic chorales. They, accomplished explorers of the other side, form a leaderless clan that effortlessly makes leaps of faith like their middle names were “Om”– whether by live looping every guitar part or audaciously matching the energy requirements to make the spastic introductory scherzo of “Tesselations” lift off.

It's the same sort of dreamy jubilance that makes reaching for the stars at their live show even more of a treat. Their show speaks such volumes that you couldn't rightly blame someone for worrying about the concept of a Buildings full-length; In many ways it seemed as hard odds as the dreaded “jam band studio album.” But the boys have honed a singular excited vision of peace and possibility that seems so foreign that it couldn't possibly be fashionable in the barren wasteland of tragically void and hip irony. They go against the grain with a smile, and that my friends, is punk.