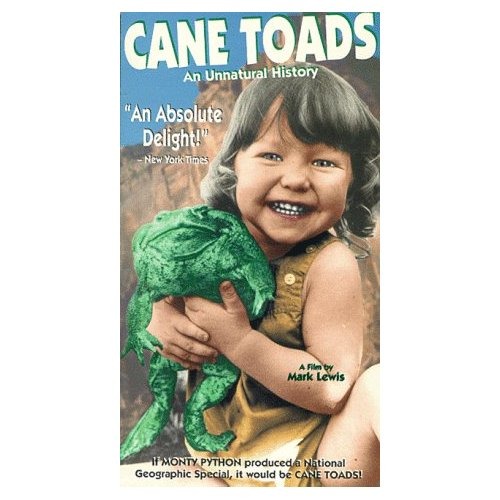 Zoology meets public policy down under in this much-lauded, rather peculiar Aussie documentary about the oversized and oversexed cane toad. Jump back to 1935 in the North Queensland region of Australia. In the sugar cane fields there is an enormous problem. It seems the cane is being systematically devoured by sugar cane grubs, which are the spawn of the greyback beetle. The fields are literally overrun with the menace and there’s little or nothing that can be done to eradicate the problem.

At the same time, in Hawaii, a similar fate for the sugar cane has been averted by the presence of the large, bumpy-textured cane toad. The toads evidently love the sugar cane grubs and beetles and they help control the problem by eating as many as they can find. The Aussies decide to import the cane toad and introduce it into the Little Mulgrave River near Gordonvale. It doesn’t take long for people to realize something isn’t working. The cane toads thrived and ate everything in sight, except the grubs and beetles they were brought in to control.

Turns out the beetles and the toads had different lifestyles and the two were not in seasonal sync. When the toads were present the grubs weren’t, so they never met. The experiment proved to be a complete failure. But that’s not the best part of the story.

The male toads apparently have a very powerful sex drive, and they were knocking ‘em out like there was no tomorrow from the moment the first batch arrived from the islands. One scientist relates the story of doing sex research on the toads and discovering that when the males were primed they were so single-minded they would attach themselves with their front legs and attempt to mate with a human foot, and even a mound of mud.

Toads are homophilic creatures, which means they love people and attach to our world very easily. They flourished to the point of becoming ubiquitous and yet they served no agricultural purpose. But the grub problem was not solved.

By the 1960s cane toads had become part of the iconic imagery of this part of Australia. The film tells that backstory and then dives headlong into a series of quaint and slightly bizarre interviews with a host of citizens who live among the toads. Some are toad lovers to the point of almost worshipping the creatures, while others mull about and declare them public enemy number one.

There are tales of folks watching lovingly as the toads mate in the moonlight, and declarations of war against the beast that recall moments of roadkill celebrated as cultural hegemony. There’s also the very strange angle involving the supposedly hallucinogenic compound found on the skin of the animal. Cane toad abuse is a serious issue and possession of the drug can bring imprisonment. There is an underground sub-culture that partakes of the drug as if it’s LSD, but this aspect is barely explored by the filmmakers.

They spend a little too much time and b-roll footage on close-ups of the odd face of the toad. More actual locations would have been insightful and as well as some visual reference. The interviews are adequate, but something from a philosopher, perhaps, on the significance of this unusual relationship would have helped to illuminate the human arrogance once again present in the face of nature. This weird film can tell us something about ourselves as much as it can teach us about the life of the cane toad. And what a life it is.