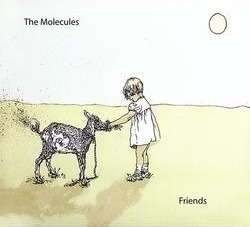 Ron Anderson and his band of sonic jihadists have reemerged after a long hiatus with a “new” record called Friends. The album’s a makeshift best-of for the group’s never completed three-disc affair entitled Complete Self Indulgence. The outing would have split evenly between “composed” songs, studio improvisations and live recordings from gigs in America and abroad. Cluing one in to the mammoth scale of the original project, Friends mainly focuses on “composed” songs, and still ends up totaling 29 tracks over the course of 67 minutes.

Their bombastic noise recipe throws The Butthole Surfers, James Chance, Hella and The Fucking Champs into a blender on frappe mode. For those undeterred, stay strong; this stuff is a bit zesty to be a refreshing beverage but it’s got your daily suggested intake of no-wave, punk and prog-rock.

Since the bulk of Friends was recorded in 1997, shortly before the group’s hiatus, it doesn’t suffer any of the tell-tale stylistic changes one comes to expect from a record it took a decade to release, (albeit this time in abridged form). The band’s still at its bone-crushing best, unhindered by an expiration date, neither softened by “improved” musical chops nor overburdened by the weight of influence; you get The Molecules at the height of their powers.

They also deliver their trademark atonal, hard rocking improv on this release, replete with random tempo/time changes beneath grooves that remain intact while the structure and the experimentalism go haywire. It’s like clutching onto your bed in a drunk stupor and watching the room spin. In fact, it’d make a perfect soundtrack for that adventure. Despite the tracks being a decade old, they feel as fresh as any band going today.

Included with the album is a feature-length DVD that covers many key Molecules performances, such as their chaotic first show, an appearance at Improvised Music Festival. Not only is the DVD valuable from a musical history perspective, it’s also exciting as hell. Once you take a trip through the audio version of Friends, hop on over to the DVD to get a look at their spectacular live antics. The shows included are a natural offshoot of the band’s music: wacky, loud, aggressive, atonal and ultimately, fantastic.

If you are a fan of groups like Hella and Lighting Bolt, then buying a Molecules record is a no-brainer. This is where many a great noise-rock group got their schooling. And regardless of musical affiliation, everybody needs to lay back and experience The Molecules. There’s no better place to start than Friends.