From LA with Love – ArtDontSleep presents 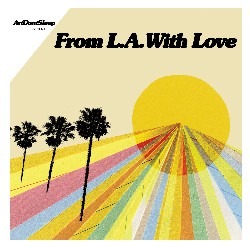 Every now and then some music washes up on our shores, telling of a far away land full of sun and grooves and dancing, a land whose name cannot be spoken, and is referred to only by two letters. L.A.

Whether or not such a land actually exists is doubtful, but producers like Andrew Lojero of ArtDontSleep are sure trying to convince us. To this end he’s put together a lush compilation of 17 tracks showcasing the Los Angeles underground music scene, whatever that is, and is marketing it to the rest of the world so that we might get a glimpse of what a good time they’re all having.

From L.A. with Love is a mixed bag of sweetness, with lump after lump of sugary trip- and mellow-hop, a soundtrack to L.A.'s endless summer. “Not a compilation, but a collection of LA's finest artists,” ArtDontSleep is attempting here to bill music as a cultural movement, with the west coast of today taking the place of Greenwich Village in the 60s or the New York of about five years ago. We stodgy Easterners can’t really judge how accurate it all is, but the results are mellow enough for anyone to groove with.

To fill that sense of community, Lojero has gathered a batch of visual artists also hailing from the city of angels, and asked them to illustrate each of the songs in a 28-page full-color booklet. Kinda like adding a visual track to the music. It sounds nice enough, and let's face it, album art is often the only reason to buy a cd these days. You can get music anywhere; sometimes it’s that physical object of songs + visuals that’s worth the $15.

The album features such hard-to-categorize groovesters as Adventure Time, Flying Lotus, The Gaslamp Killer, Coleman, Nathan Yell and Yesterday’s New Quintet, all displaying a jazzy electronica with occasional vocals, showing influences from both Blues and Japanese Shibuya-kei dance. In spite of the stereotypes, there’s no rap in L.A., aside from a few samples, though there’s plenty of saxophone. Also featured is a short clip from the late DJ Dusk (Tarek Captan), who was killed early last year by a drunk driver. “If you feel all right now make some noise and let me know,” he asks, mid-set. Would that we could, brother.

Some of the most engaging songs come at the end, like the appealing “Sound at Sea” by Free Moral Agents, the most indie rock of a mostly electronic set. The song lingers like a happy exhaustion at the end of a long day, and is worth a second listen after the cd’s done spinning.

Capping off the flow is a flute-heavy orchestral piece by Carlos Nino and Miguel Atwood-Ferguson called “Nag Champa,” which we can only guess is a tribute to the incense most favored by those guys selling crap on the sidewalk. It stands out in a different style from the rest, drifting somewhere around Rashaan Roland Kirk, Phillip Glass and an episode of Leave it to Beaver.

Though not all that interesting separately, the songs meld together for an hour-long groove session that might work well for a lazy Sunday or a long car drive. Of course, New Yorkers don’t have lazy Sundays or long car drives, so maybe we’d be better off waiting for something more exciting to come out of L.A. Like an earthquake.

In the meantime, From L.A with Love can fill your need for fun summer music, which you’ve been jonesing for ever since the car stereo ate that Beach Boys cassette back in ‘96.