Gettin’ Gone – MV and EE with the Golden Road 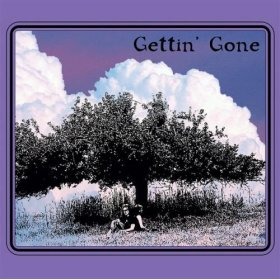 MV and EE (Matt Valentine and Erika Elder) seem willfully anachronistic. Maybe it’s because “acid-folk” seems like a genre made up by people who want to sell compilation CDs on late-night infomercials. But when they get together to jam, whether it’s with the Golden Road, as on this album, or with the Bummer Road on the previous, the late 60s get conjured in the form of heavy, trippy folk, earthy vocals, and people who can’t quite play their instruments.

As with most male/female bands who share vocals, the female is more interesting, and underrepresented. When she does come in, it’s mostly like the ghost of Haight-Ashbury wandering behind the music: an, ethereal, slightly disinterested hippie-banshee whispering at you. As such it can be a lovely voice, with a not-quite-there feel that can be enthralling (you imagine she sings while constantly looking off to one side). On the soft “I Got Caves in There” for instance, she whispers “the world is my cave” over and over, while MV picks his folk guitar sweetly – and you know what? I believe her.

MV’s voice, however, is much harder to get used to. Perhaps he hails from a simpler time, when being slightly off-pitch always was an art, like bead-making or Morris dancing. Or maybe he just can’t sing. He does have several moments where you’re compelled to slap the microphone out of his hands and yell “Bad guitarist! No vocals!” At other times the voice fits perfectly with this slightly off-kilter music, but only after you get over the initial “wtf?”

The songs themselves, once you get over the singers, are frequently nice. Long, trippy folk-scapades full of rolling hills and lulling fingerpicking and overdriven guitar lines somewhere out of Jefferson Airplane. “Susquehana” opens the album as a loving tribute to one of the dirtiest rivers on the east coast, in a jam that feels equally down-home Pennsylvania and privileged New England. “I want your lovin’ from dusk till dawn / and I don’t want a manicured lawn,” the two sing together in something not quite harmony. Then some big, reverbed 70s guitar licks come down and the drums take over and suddenly everything smells like marijuana.

The stand-out track is the long and beautifully languorous “Hammer”, nearly eight minutes of fuzzy leads and EE’s wispy voice leading one down a rabbit-hole of trip-folk. “Take this hammer, give it to the captain, tell him I’m gone,” she sings, and “If he asks if I was runnin’, tell him I was flyin’”. I don’t know if this Captain is the same as Mr. Tambourine Man, but a hammer is a pretty threatening gift to give anyone, so he’d better watch out.

The best part about “Hammer” though, is that MV doesn’t sing on it. If only there were more like that.