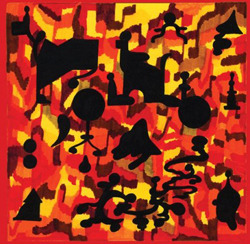 First it should be noted that the artwork for this album is courtesy of Shawn Reed of Night People, which is a label/collective based in Iowa City that I drunkenly found one night, while pub crawling through Pedestrian Plaza. While it is not relevant to the critique of this record, I wanted to note that I enjoyed this discovery. If you find this record is not your flavor du jour, at least take from this review that Night People Records has some intriguing artists and musicians.

In the past year bedroom projects from the front men of our favorite bands have been cause for alarm, as the midnight toiling that happens between albums has surpassed the achievements of their respective collectives. Panda Bear blew our minds with Person Pitch, Bradford Cox sent us adrift with Atlas Sound, now add Dan Friel of Parts & Labor to front men who can create alone — possibly to a fault.

Ghost Town is the type of noise music I can appreciate, sonic booms of reverb melodies layered under campy 8-bit synths. Admitting that noise is a genre I know little about, I often find myself enthusiastic for a song’s culminating rise into a ear-puncturing crescendo of dissonance — I just never wanted an entire song of that, until I heard the crash and rev like a muscle car engine wired to an effects pedal on “Singing Sand”. Dan Friel, singer/electrician of Parts & Labor, has been making these noisy electronic records well before starting Parts & Labor, but Ghost Town is my first venture into his bedroom recordings — let's just say after listening I could get into bed with Friel’s project, and no, I would not just lie there.

The most pleasing aspect of this 29-minute electro bender is that it's not a fucking dance record. Granted, I rather enjoy a good dance record, but Friel has crafted an album that borrows the electro clash, the fuzz stomp and the glitch button pressing tricks of the club kids, but transverses into a middle ground currently occupied by Holy Fuck. Unfortunately, for Holy Fuck, Ghost Town sounds like the record it has been striving to create—a jumbled harmonious chaos collage built from junk equipment.

From the dial-up connection of “Ghost Town, Pt 1” Friel never lets up in turning white noise into blissful marching anthems. It is active music that arouses an undeniable head nod, if not a complete bodily spaz out. My guess is if Friel is playing a live solo set any time soon, get your skinny ass to that show and electric boog-a-loo to to the sonic pulse of “Buzzards.” Amidst the 29 minutes of bedlam mosaic, Friel manages to occasionally let up on the gas in favor of a calmer cruise control. “One Legged Cowboy” is sandwiched between the music of Sodom (“Desert Song”) and Gomorrah (“Appliances to Bremen”), in a quiet desert with room for ethereal drift, as angels on high coo to lo-fi buzzsaws synths and the sound of God's cell phone ringer.

I hate to say it, but these three men do not need their bands, regardless of each of their bands being forerunners in their respective genres. We love the melodic freakiness of Animal Collective, the droned out garage (or recent transition to clean surf rock) of Deerhunter and damn it, we love the ringing tone in our ears from listening to Parts & Labor too loud. But, isolate these men and it gets easy to forget about the band. It is good to know a musician can stand on his own two, when the co-op has run its course, but what if the others are just keeping us from the music we truly crave?