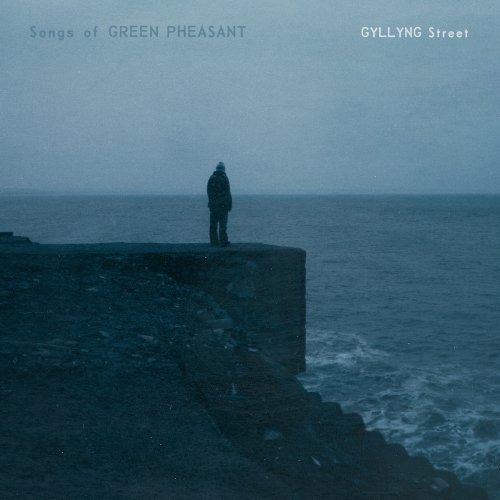 Gyllyng Street is the third release by Great Britain’s Songs of Green Pheasant (Duncan Sumpner) and although the album has its beautiful moments, the music often falls flat, the lyrics are obscured in gauzy layers of reverb, and the “ambient” sounds he employs often come off as sound effects rather than mood enhancing details.

As the title suggests, Gyllyng Street refers to the street where lead singer Duncan Sumpner once lived as an art student. According to the press packet, the real Gyllyng Street was populated by “drug dealers, assorted transients and drifters.” Although the album is highly atmospheric, the music hardly brings to mind this gritty locale; rather, after my fourth listen to Gyllyng Street, much as the cover photo suggests, I felt as if I were at the beach on vacation, only it was raining the whole time and I’d forgotten my cigarettes. The album does in fact bring a landscape to mind but it’s not the landscape of the title. In fact it is a landscape devoid of any characters at all, since you can’t understand the lyrics and after a while it starts to seem as if the album were composed by Eeyore on one of his especially lonely days. Why doesn’t the work match up with the description of Gyllyng Street, and, does it matter?

The reasons for this are a mystery, but I’ll muster a guess; on his first self-titled release, Duncan used a four track to record himself via overdub. For Gyllyng Street, the artist graduated to an eight track and enlisted the help of four other musicians. Perhaps this upgrade was too much to handle, too much complexity for a musician that seems to lend himself to a certain starkness and a stripped down approach. Perhaps this is the reason many of the so-called “atmospheric” or evocative elements of the album come off at best as arbitrary and at worst as red herrings. Why for instance do church bells end the first track? To what end does the rainfall on track seven come to? Why are there so many random clattering and percussive elements to the album? These attempts at complexity just end up seeming like window dressing on less than compelling music.

This muddled feeling isn’t exclusively a property of the music; it extends to the vocals as well; the press packet for the album describes Duncan’s voice as being “sheathed in reverb”. I suppose this is just a nice way of saying the unintelligibility of the lyrics was a stylistic choice. To someone who values strong lyrical content, this choice seems almost selfish and certainly misled. The exception to this complaint is Julia Cole’s singing on track six, which is a welcome respite from the “cocoon” of reverb and feedback that pervades the album. She provides one of the few cheery, bright, and dare I say crisp moments of an otherwise overly soggy album. In fact, the whole album feels as if it were suffering from a low-level depression. Although at moments beautiful, Sumpner’s music is also entirely too plodding, too slow and too atmospheric for my taste. The press packet describes Sumpner’s style as being “cloudy, dreamlike”, creating a “ cocooning space”. Yet, this description, although accurate, could also be said about being lost in a damp fog or wrapped in a wet blanket, which is exactly what Gyllyng Street turns out to be.

As listeners, we often forgive a less than compelling intro if the meat of the song turns out to be worthy of our attention. We say to ourselves, “okay, perhaps this sounds like the pan-in soundtrack of a prime-time docu-drama, but the rest of the song redeems itself.” Yet, what happens when all you have left to say of an album is that it’s atmospheric and evocative? These aren’t shabby adjectives to be sure, it could be a lot worse, but they’re only preliminary descriptors and should never be thought of as an end in themselves. There are some beautiful moments in Gyllyng Street but in the end it’s just like a rainy day at the beach: beautiful and boring.