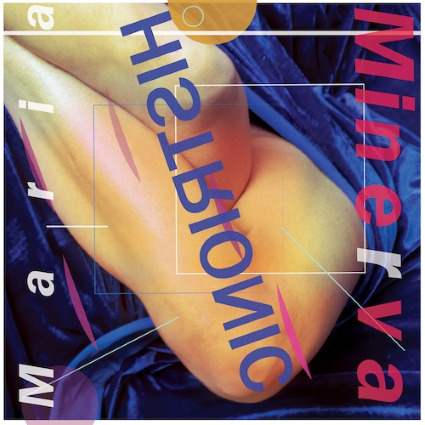 “Get this into your head and never forget it: wolves and lambs look not on one another with gentle eyes.” So concludes the narrative of “Wolves and Lambs,” a song appearing on the latest album from Estonian-born musician Maria Juur, who performs as Maria Minerva. The lyrics are a passage by the French poet Comte de Lautréamont; this line in particular is a quote within a quote, marking a moment when de Lautréamont’s narrator speaks directly to a passerby. For Juur, transplanting a literary text is not a wholly unprecedented move, as she’s been known to incorporate academic concerns into her music, often in ways that are playful or iconoclastic (her Sacred and Profane Love EP, for instance, saw her throwing religious texts into conversation with Britney Spears.) But Histrionic is more consistently danceable than anything she’s made in the past, its esoteric aspects woven into a composition of heavy 4/4 beats and tastefully diced-up samples, with Juur’s own unaffected, flexible voice foregrounded in the mix. As a result, the deadpan recitation on “Wolves and Lambs” is easier to digest, and it comes across as surprisingly personal.

So which is Maria Minerva: a wolf or a lamb? It depends on how you pick apart the question. Histrionic is a more accessible offering than her last two LPs, Will Happiness Find Me? and Cabaret Cixous, which frequently drenched Juur’s voice in echo and followed nebulous song structures. Here, Juur’s silky voice is a softly insistent presence, a clear but pliable instrument that she uses to lovely effect—the fragmented melodies on “Deepest Darkest” and “The Beginning” are some of the most wistful she’s recorded yet, and the mutating, interwoven harmonies on “Endgame” are as weird as they are beautiful.

There’s some sweetness in her lyrics as well. “Runaway,” the album’s immersive centerpiece, features Juur sighing coyly at some romantic object, “I never want to waste your time.” But the song is of two minds, its chorus ordering the same person to “give me one good reason why you can’t stay.” There’s a ferocity that runs through Histrionic that lays defiant claim to the titular adjective, a term disproportionately aimed at women, and often at female vocal performances. Along with the increasingly dance-oriented music, this implicit idea strengthens a symbolic lineage between Juur and other lo-fi disco chanteuses like Cristina, who presented a vaguely satirical, intellectualized version of the pop diva image.

Histrionic is the first album Juur has recorded since acquiring an artist’s visa that allowed her to work full-time in the U.S., and though its house and techno ties express a certain sense of community, it’s also full of ambivalence. Tracks like “Deepest Darkest” and “Endgame,” pair vague, pitched-down dissonance with lethargic, handmade-sounding drum beats—a sound reminiscent of Actress’ equally complex musical dystopia from earlier this year, Ghettoville. Elsewhere, the more carefree-sounding tracks express conflicting attitudes towards academia (“Ivory Tower”) and, more pointedly, life as a touring musician. “Spirit of the Underground” is a rousing fusion of droning synths and echoey vocals that’s easy to imagine playing in a nightclub filled with lasers and smoke machines, but with closer listens it reveals itself to be a vivid condemnation of the very culture it evokes. “The spirit of the underground/ is a spirit that I’ve never found/ on my endless journey through the night,” Juur declares (then, to drive her point home, she follows up with a derisive, liberally repeated question: “Did your Mama drop you off at this party?”).

None of this is to say that listening to Histrionic is a negative experience—in fact, it’s a pleasurable, even inspiring one, as full of ear-wormy melodies as attention-grabbing ideas. The hand-stitched sound quality is still there, but the music is more consistently immersive, and in that context her voice sounds more magnetic than ever. Wolf or lamb, Histrionic proves that Juur is capable of courting a wider audience without dulling her personality.