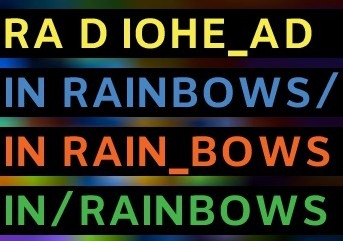 In Rainbows solidifies Radiohead's claim to having created a unique genre of music sandwiched between its early rock roots and its later electronic experimentation. It is a genre that's already launched 1,000 faux Radioheads, and its latest album makes air-tight its own sonic vessel. Granted, the categorization of musical genre can only be articulated justly through the paradigm of historical retrospective; it is hard to define what is without explaining what happened before and after. Yet, Radiohead's discography cuts a path into recent musical history that is succinctly progressive, and different; it's a clear delineation from the parallel universe of static homogeneity heard in most alternative/independent rock music.

As Radiohead’s seventh full-length album, In Rainbows sits well in the Radiohead canon. It is retrospective of earlier experimental styles from the Kid A/Amnesiac days and the gutsy rock epics Hail to the Thief and OK Computer. Yet, retrospection is what makes In Rainbows the reification of Radiohead as genre. It has some sense of looking forward (the innovative drum delays in “Videotape”), but keeps its reigns tight, especially with “Bodysnatchers,” which could probably use another one or two minutes to satisfy my appetite for Jonny Greenwood's demolishing guitar sound.

“15 Step” opens up the release with some dirty drum loops that recall the computerized mash-ups found in Kid A. Bowing to the similar sonic build-up found in “There, There” from Hail to the Thief is the turbulent “Bodysnatchers.” The stereophonic interplay of multi-layered sound grows in weight and complexity beneath the centralizing force of Thom Yorke’s mellifluous croon. And of course, the ondes martenot makes its expected appearance. There is a surprisingly sentimental, haunting tone to “Nude,” “Faust Arp” and “House of Cards.” Less surprising is the nuanced layering of guitar arpeggios laid as a backdrop to the drone of Yorke's beautifully morose vocals in “Weird Fishes/Arpeggi.”

Despite stylistic changes and sonic explorations from song to song, In Rainbows is a cohesive piece of work shaped by an arch-like structure. The raucous “15 Step” reaches an apex at the like-minded “Reckoner” (which is artfully sandwiched between the deftly earnest sounds of Faust Arp and House of Cards), while the album concludes with a repetitive and contemplative fade-out in “Videotape.” (Incidentally, this arch-like structure exists on a microcosmic level as well in “15 Step” and “Reckoner.”) It's not surprising that Kid A is littered with this same formalistic features in songs like “Everything in its Right Place” and “Optimistic.”

In Rainbows is the culmination of years of pushing and exploring the sonic possibilities within the context of a mass media driven, and, consequentially, fickle industry. Yet, this is all too familiar territory for Radiohead. In Rainbows is not a progressive step forward, rather, it states, authoritatively and thoroughly, what has already been said by the band (with a cameo string section in “Faust Arp” and “Reckoner”). However, this statement is more than repetition of what has been said, it is a clear assertion that Radiohead is no longer just a band; they are a genre. Pending, of course, the lucid affirmation of historical perspective.