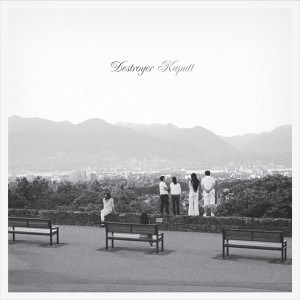 I first realized that Dan Bejar was trying to expand his
sound and really push himself into new territory at about the 1:15 mark of the
self-titled song on the Bay of Pigs EP that came out two years ago. For a few seconds there’s
something that resembles Terry Riley’s “A Rainbow in Curved Air,” and then a
confession — Bejar singing that he’s been drinking as his house is ruined. He then spends about twelve more minutes turning his personal life into a disco jam.

In my eyes, Bay of
Pigs was a triumph followed with another fantastic and complex
EP, Archers on the Beach. But for somebody who has been
listening closely to Bejar’s work for the past decade, Bay was the sign of things to come, and it has led us to the first
truly magnificent album of 2011, Kaputt.

Song for song, this is not just the greatest thing Bejar has produced, but it’s evidence of his progression and climb to the top. As a singer and songwriter, he’s mastered the fine art of
restraint; knowing what words to sing, and knowing exactly when to sing
them. He’s running laps around
nearly every other lyricist, and the composition of the music is note
perfect, right down to the soft rock saxophone (which is an album highlight).

Bejar’s use of a faux-English accent is a whole other
review in itself. Very rarely in
the history of modern music has anybody pulled off trying to sound
like an Englishman, but it works to give these songs a dramatic polish. The best example of this is the opening 20 seconds of
the song “Blue Eyes,” where Bejar sings:

He just nails it so fucking hard, and it solidifies the song as the best of the entire album, one that is already 50 minutes of pure bliss.