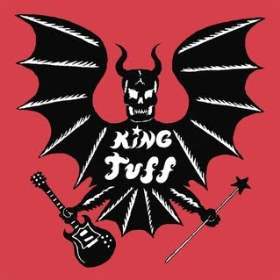 While his tinny 8-track debut album, Was Dead, aligned Kyle Thomas, the sole permanent member of King Tuff, with the new school of soft punk and garage with hooks, his latest eponymous album stridently defies the trappings of that scene.

Of course, breaking formula will elicit criticism. Detractors will likely resent what they perceive as Bobby Harlow’s “slick” production and the varied song-writing might fail to hold passive listeners’ attentions who expect a second serving of Was Dead. A subconscious fetish seems to have developed in the modern garage camp for the tone of analog home recordings and without the familiar tape hiss on King Tuff, many listeners will feel alienated. The tragedy of this dire prediction is that King Tuff is actually a much more realized and well-rounded album than Was Dead.

Glam, power pop and proto-punk are not uncommon influences in our retro-maniacal rock milieu, but King Tuff channels such musical microcosms in a refreshingly oblique fashion. Traces of glam generally manifest in rock today as hand claps or Glitter Band aping, four-on-the-floor simplicity. In a departure from such obvious vintage tropes, King Tuff opens with “Anthem,” a triumphant ¾ time march that, along with “Keep on Movin’,” hearkens to the grandiose drama of early Slade, while the squirrely, frat rock leads on “Stranger” evoke early Sweet. Likewise, instead of the influence of power pop arriving as blatant Nerves-worship, the chorus to “Bad Thing” rears its overdriven guitar fury and recalls the unique power pop approach of later period Redd Kross. For that matter, the sly delivery of the chorus and subject matter of “Stupid Superstar” owes more to Redd Kross than anything else.

“Bad Thing” is also a high point lyrically. Its bridge conveys an underexplored, paradoxical rock ‘n roll archetype: Outwardly skuzzy artists capable of shimmering pop brilliance. When Thomas sings “When I play my Stratocaster, I feel like an innocent kid / But when I’m looking in the mirror, I remember the bad things I did,” its simple sentiments poignantly sum up the duality that’s so attractive about punks, freaks and degenerates crafting pop music. Catchy chord progressions are gratifying, but their performance by an admittedly maladjusted artist like Thomas adds an additional taboo appeal. The bridge illustrates the duality musically as well. Its first half is intimate and unadorned, but it erupts during the tormented revealing of wrong-doing, somehow combining both parts into one hook.

“Unusual World” explores the elevated significance of ordinary objects viewed out of context, a likely interest of a visual artist like Thomas, and a theme of Was Dead. The sense of bewilderment and mystery is most evident on “Unusual World,” where the lackadaisical pace and reflective acoustic minimalism is the ideal vessel for Thomas to dwell on life’s elusive majesty. Such mellow and restrained tracks are the album’s most pleasant surprises. Reportedly included at the insistence of Harlow, acoustic numbers like “Swamp of Love” reveal that Thomas song-writing isn’t restricted to just driving, electric scorchers.

Bobby Harlow was apparently very assertive in his role as producer on King Tuff. He personally culled the final tracks from more than 40 demos. The acoustic numbers might not have wound up on the album if not for his insistence, so we have him to thank for contributing to the album’s well-proportioned variety. Apparently, Thomas envisioned more songs with guitar solos, which Harlow nixed for the sake of simplicity. The few that remain, however, show that Thomas’ tenure in Witch with fellow virtuoso J. Mascis has sharpened his playing into a tasteful, dynamic force. During the exalted finale of “Swamp of Love,” Thomas descends into deceivingly simple, classy leads that cultivate tension by never bursting into the unhinged shredding listeners expect, while the solo on “Bad Thing” channels Richard Thompson with psych proclivities, and the performance on “Stranger” is delightfully like Johnny Thunders on 45.

If modern garage devotees are unable to forgive the heavy-handed production and variety on King Tuff, they have fetishized their ramshackle, lo-fi aesthetic to a fault. It would be a mistake to demonize the album for its formula defiance, or lament the loss of Was Dead’s primitivism, because such ignorant pigheadedness would neglect one of the best records to ascend from the new school of light garage in recent memory.