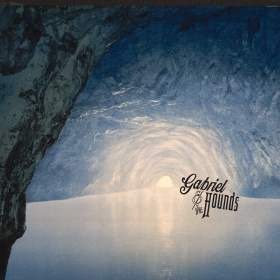 Takka Takka’s Gabriel Levine may have a full set of teeth hidden behind his lips, but he keeps them hidden in his solo debut as Gabriel & The Hounds, Kiss Full of Teeth. Soft and sullen, the record flies past personal, intimate, or masterfully moody and dives right into a deep depression.

At least there’s one exhilarating springboard track before we greet our old friend Darkness. Track two, the awe-inspiring “What Good Would That Do?” buries its big-sigh-let’s-just-cry-about-it message behind a western guitar twang, bumping the song along like a tumbleweed trapped in a dark hall of dusty memories. You get the feeling that somewhere in the singer’s mind, this song is a stand-off between him and some silent girl (or guy), teasing out the simple battle of differences between two people – a wishy-washy stand-off, I grant you, but a great one to sway along to as the sun bakes the sand.

Unfortunately, the swaying stops here, and the sobbing soon begins. The rest of the album unfolds like a slow waltz – following all the steps of a predictable and vague romance. Vibrant violins and hooting horns, instruments that tend to make tunes stand out these days, can’t drag Kiss Full of Teeth from its moody, melancholic focus on yesterday’s love. This album’s bringing me down so hard I recommend a name change from Gabriel to Bruce. It’s not just the attitude of sadness that induces heart sinks, it’s the moping nothing behind each lyric – too nondescript and without any realized redemption – that keep the tracks from becoming truly compelling.

Even songs like “Wire and Stone,” who start slow but ultimately change (in the case of “Wire and Stone,” the song twists into a militant march right before it cuts off, bringing those empty, enchanted suits of armor from the end of Bedknobs & Broomsticks to my mind), disappoint. The shifts are too late, like a school bell at the end of a brutal and boring day. Welcome, but you wish it had come thatmuch sooner.

Far from a bare or brash record, Kiss Full of Teeth melts into a muddy melancholy. While some tracks stand out, ultimately Kiss Full of Teeth lacks its name’s aggression and strength, melting into a dirge for dead dreams that competes with even the darkest days.