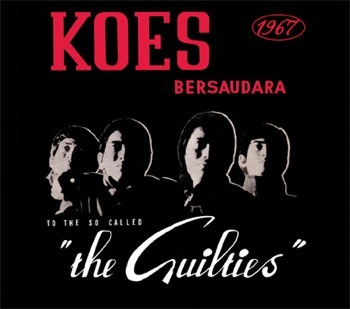 The re-releasing of obscure nuggets from 1967 is always a welcomed event. The two most popular albums from Jakarta’s bands of brothers, Koes Bersaudara, Guilties and Djadikan Aku Domba Mu, are seeing the light of day once again as Koes Bersaudara 1967 comes out through Sublime Frequencies.

First up is the energy charged songs from To the So-Called Guilties, a record that came from the band’s imprisonment by Indonesian authorities during an uptight ban of Beatle-mania amped rock n’ roll. What the Koes brothers pull off here is something that thrills more than most offerings from the Sunset Strip’s go-go heads from back in the day. “Hari Ini (Today)” is full of bright guitars and carpe diem vocals that recall old faded Polaroid pictures and all that hippy activism your parents did but to this day deny. Needless to say, the Indonesian brothers faced a far more literal Man trying to Bring Them Down, up until the fall of the country's communist regime in 1965.

The title track “To the so-called ‘The Guilties” raps against the man after the band’s three months incarceration for performing a cover of “I Saw Her Standing There” at a house party. With an angered passion they spit the following venom;

Swinging back to a 60s LA sound, “Apa Sadja (Whatever)” resounds like a pepped up outtake from the self-titled Love album. “3 Little Words” is a bittersweet romantic interlude, “Bintang Mars (Mars Star)” is an intergalactic jangler and “Poor Clown” sounds like what might happen if the Everlies drank the electric cool kool aid and decided to never record their album Roots.

Great pop numbers abound throughout this beautiful reissue. “Laguku Sendiri (My Song)” is a gorgeous gem, while “Di Dalam (In Jail)” and “Voorman (Jailor)” echo their incarcerated stint in the slammer per violation of Indonesia’s then President Soekarno ban of by-products of Western decadence. More gorgeous super 60s numbers like “Balada Kamar 15 (The Ballad of Room 15),” “Rasa Hatiku (The Feel of my Heart),” “Lontjeng Jang Kenjil (Tiny Bell)” has a Forever Changes quality with the guitars ringing like orchestral bells.

The bulk of the Djadikan Aku Domba Mu album on the latter half of the disc sounds like a more surreal and haunted pastoral work in step with the style of Odyssey and the Oracle. This is evident on ethereal tracks like “Bidadari (The Fairy),” “Untuk Ajah Dan Ibu (Dear Mom and Dad),” “Aku Berdjandji (I Promise)”and the rewarding finale relic; “The Land of Evergreen.” Never mind the contrived boardroom-conjured Sgt. Peppers bollocks and get acquainted with a lost garage/psych masterpiece.

Under duress, political suppression with apologies to the Beatles; Koes Bersaudara 1967 is a time capsule that will take you to time and place where the rock n’ roll is outlawed and the brothers Koes are the country's most famous fugitives.