Lost In The Dream – The War On Drugs 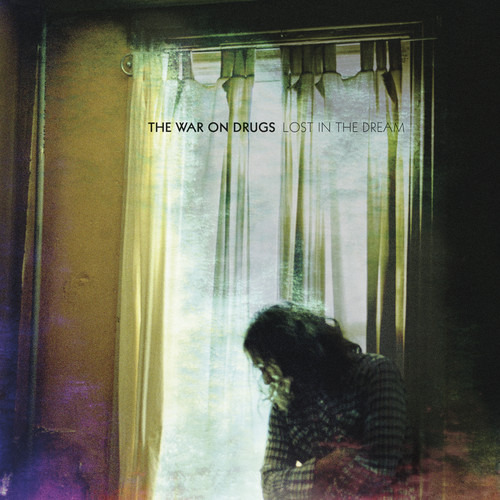 Every album represents something of a crisis. The narrative shifts with age and success, surely, but the stakes prove the same, the old questions of the artist: Where have you been these past few years, and what was it you were working on, and will it be better or worse or different or the same as your last record, and what if this goes very, very badly? Even more damaging, and this is a more recent phenomenon: What does it all mean? So of all the critical successes on Philly quartet The War on Drugs' third LP, Lost In The Dream, the most stirring is that the band seem largely unaware of their previous work.

Lead singer Adam Granduciel mumbles, “Under the pressure is where we are” on the album's opening track, “Under The Pressure”, and yet the song tips out toward nine minutes, one of the four songs on the album's first half that exceed six minutes. This isn't a band seeking to essentialize the pop approachability, maybe even the deep commercial underappreciation, of Slave Ambient. It could well be that Granduciel has already written his best record for consumption, and how does one free oneself from that truth? Lost In The Dream is an attempt to do this trick. Standing as a monolith of possibility and ambition, seemingly reverent of history while being free of its own, Lost In The Dream, drifts away with power and authority, both frustrating and impressed with its unique brand of magic.

Granduciel seeks permanence and relevance throughout Lost In The Dream, though notably without the scent of desperation that so often follows projects with this type of imperative. On titanic, slow-build, “An Ocean Between The Waves”, he sings “I'm in my finest hour/Can I be more than just a fool?”, the artist's search for meaning in his own discrete greatness. The song's lyrics address areas of darkness, the titular suggestion of an expansive universe between and free from the world of our vision. It's easy to picture The War on Drugs sliding into this space between the waves, a band recalling tropes of Dylan (most notably in the chord resolutions and diction of “Eyes to the Wind” among many others) and Tom Petty, finding itself nowhere near as popular and iconic as those artists but acclaimed in certain circles in their own time. How does an artist create something durable in this climate of historical forgetting? Even the profound size and scope of the arrangement on “An Ocean Between The Waves,” easily the album's biggest and best track, comes to an abrupt halt near the beginning of its seventh minute. The War on Drugs aren't out of ideas here, but even something this capacious runs out of room. Even the essential “Red Eyes” doesn't end, it fades out, implying that maybe the song was never over, it just had the volume turned down. This is how to build something that lasts in a linear world that has no taste for the infinity between the waves.

The guitars are left to wander here, often not leading the arrangements but exploring them. Recalling some of Mark Knopfler's work with Dire Straits, the lead guitar operates under its own logic, a freelancer brought into a well-run organization. On “The Haunting Idle”, an instrumental, ambient and trying exercise, the guitar is turned into sluggish, pedal-infused, street preacher, yawning and yelling its way to nowhere. With no break between this and next track, the Tom Petty-indebted, “Burning”, the guitars refocus from lines to chords, before meandering away on the eponymous, “Lost In The Dream”. Granduciel and his mates derive some of their best artistry from this dialectic, the conversant nature of their metronomic synthesizer work and the free-form of the guitar. “Under The Pressure” casts these two entities as figure-eight, weaving in between one another, threatening collision, never delivering on its potentially devastating promise. It's a high-wire act. On the chorus of single, “Red Eyes”, Granduciel delivers—with guitar line and synthesizer all headed for the the top of the room—one of the album's most quintessence examples of organizing chaos.

There's a review of this record that is told only through the spaces between Granduciel's yelps and screams. These are the band's best and most revealing moments, their lead singer so overcome that the pressure releases as a little “whoop”. A guy who seems so intent on remaining distant, a singer content and serious in singing lines like, “When it all breaks down and we're runaways standing in the wake of our pain,” these yelps are moments of transfiguration. Or maybe they are the outstanding mixture of agony and joy that attends building songs like these, an album like this, a music completely informed of a certain history and seemingly free of it. This is the patience of a lyric like, “I don't mind you disappearing when I know you can be found.” What was discovered in the 29 months since Slave Ambient? The crisis: how to hide and be found, how to release and to seek, how to build and destroy your own critical artistic history. Sometimes it comes out under its own auspices. Sometimes it screams.