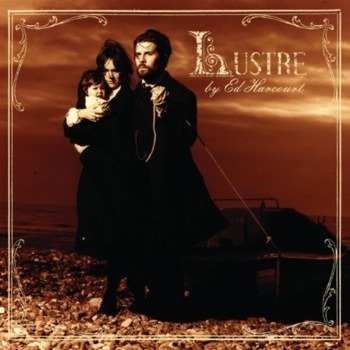 Where’d this excellent little orb come from? Ed Harcourt’s fifth LP sneaks up on you not unlike a lot of Ed Harcourt’s best songs tend to sneak up on you. He’s worked with a whole bunch of interesting musicians, from the late, great Mark Linkous to Patti Smith and Tom Jones, and he knows his way around a song and an arrangement.

Actually, the musical mechanics (vocals, melodies, arrangements) are so efficient that the songs feel like they were snatched right out of thin air. And his songs generally belie any superficial first impressions. The great Nilsson-esque title track kicks things off, and sets a way-high standard (with woozy female vocals) that could prove to be a hard act to live up to for an entire album.

Not so in this case, as Harcourt proceeds to blow your mind with some smart, gripping, penetrating music. New-millennium-free rock of the first order. Harcourt says, “It’s an album about action, life and the lustre that you have in your eyes when you feel you’re living for something. If my last album was weighed down, like an anchor, this one is a buoy.”

Harcourt’s dusky and deliberate vocals are a big part of that buoy effect on this album. Several songs deliver easily on the promise of the opener, with something to spare. “Church of No Religion” is almost picture-perfect as backroom pop-ballads go, but it only hints at the murky stardust flickering behind “Heart Of A Wolf.” With its excellent spatial piano and dual male-female vocal opening it’s a complete mystery where it’s going at first. Then, it soon becomes an example of the Harcourt School of the Understated Tune that morphs into something sharp as a razor. Then there’s the darkly elegant “Killed By The Morning Sun” – a total knock-out, a perfect song. Co-producers Ryan Hadlock and Harcourt mostly leave well enough alone, and limit the knob-twiddling to only what’s necessary to pull out every single note with brilliant clarity.

The last track, “Fears of A Father,” is a good example of the special queasy euphoria underlying it all, hyperbolic and still in control, with the organ pulling against the female vocals. It’s kind of like Leonard Cohen, half-giddy and in father/preacher mode, and maybe on nitrous oxide. It takes us home on a high note, for sure. It’s All-Ed-All-The-Time, but his songs are genuinely universal. In case you’re trying to reach him, he can now be found rolling dice with the likes of Mark Eitzel, Eric Bachman and Sufjan Stevens. This is one of the albums of the year, so far. It’s wildly transcendent and down to earth and totally tactile at the same time. It’s appropriate that it comes out at the mid-point of the year, because it sets a marker for understated greatness in 2010.