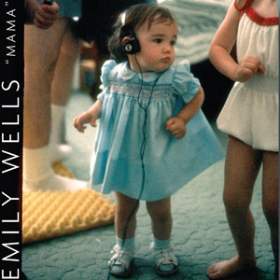 Emily Wells can sing folk music that sticks down deep but doesn’t feel old. She can also sing the phrase “horse’s ass” prettier than you probably ever thought possible.

Following her 2008 breakthrough album, Well’s latest record, Mama, combines experimentation with emotion, without sacrificing one to the other. Recorded straight to tape without loops, Wells’ lush tunes unfold between cut-in clips and shaken sound effects, closely following and never overpowering her voice – a voice that’s made precious while somehow also being distorted, raspy, repressed and hushed. At times mumbled and often quiet, Mama sounds like Wells recorded the entire album under her breath, but her mystical musings, stretched across tracks that aren’t quick to hit the finish line, are worth your minutes.

One of Mama’s standout songs, “Passenger,” initially makes me think of both Jack Nicholson in the desert and Lana Del Rey’s diary. In-between dramatic thumps, Wells sings the chorus: “I’m the passenger/Give me the keys I wanna drive/I’m the passenger/If you give me the keys you know I won’t survive.” But while she at first sounds like she’s waxing weak, Wells ultimately puts the “girls can’t drive” stereotype into her rearview with the sullen but not-so-sexist realization that ridin’ solo is more stressful than satisfying. Comparing herself to legends like the Lone Ranger, Wells makes independent decision-making seem downright desolate, while being along for the ride sounds like a relief – a path clearly carved ahead of you. It may not be a chick power message, but there’s definitely an undeniable grain of truth (for boys and girls) stuffed into “Passenger’s” desire to be driven.

The album’s longest number, “Let Your Guard Down,” is an emotional epic that borders on the operatic, fueled by Wells’ piercing and mutating voice, once again engaged in a heartfelt turn of phrase destined to sink into a swollen symphony. Left alone for a brief moment, Wells’ voice wavers in the middle of the phrase “I can’t give you what you need,” exposing a tender moment of forlorn inadequacy. Yet as the song progresses, Wells’ repeated “guard down” transforms into “goddamn” with a simple vocal twist. At first almost unnoticeable, the switch is soon echoed more overtly in spliced spoken word sound clips, emphasizing the anger seeping into the song’s soil. The crunchy contrast to the sweet recycled choruses toward the end of the number perfectly capture that “oh fuck…you” feeling that accompanies the end of almost any relationship, synthesizing rage with remorse.

Fairly monochromatic, Mama builds on a single mood, but it really plunges the depths, even as it stresses myth and metaphor over exposition. Like a carefully crafted story, each listen reveals a slightly different layer – another beautiful moment, caught in the overall vibe of lost love and lost direction. Emily Wells’ unique voice, combined with her talent for taping, make Mama a strange, unsettling lullaby for loners and plaintive passengers alike.