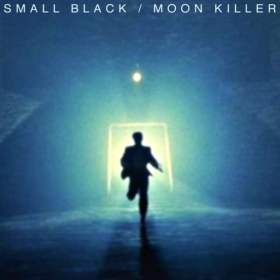 Small Black’s free Moon Killer mixtape sounds and feels like one long scene from Lost in Translation. Sure to induce stare-into-space contemplative calm, Moon Killer also infuses a healthy dose of boogieing New Wave synths into its zoned-out vibe, making it prime for both dancing and drifting.

With guest spots by Das Racist’s Heems and Star Slinger and Phonetag remixes of old singles, Moon Killer is definitely something different for Brooklyn’s Small Black. They’ve already made attempts to transcend their unwanted chillwave label by adding a heavy dose of the 80s club-friendly synths to their dreamy electro-pop and improving their production quality since their 2009 debut. But this free mixtape might really break the first brick in the wall.
Making their professed love for hip-hop more clear by inviting Heems to slow-rap a few non-sequiturs over their hazed-out heavy beats, Small Black even remix Nicki Minaj’s creampuff 2010 single, “Your Love,” tossing in a twisted clip or two from Drake’s part in “I’m On One,” into “Love’s Not Enough.” The mix surprisingly transforms a near-unlistenable Nicki track into a real song, smooth, danceable, and catchy.
Small Black get downright dark and heavy in their new songs on Moon Killer. The album’s title track features a thick, almost-evil synth beat under its electro-sparkling that really does sound a bit like a moon murder in progress. Singing of options and opportunities without pressure or guidelines, Small Black hit the high notes with the repeated line, “Never make you try-yyy.”
Moon Killer falters only when the band falls back into too-chill territory, particularly on “Late Night G.” The slowed-down samples on this track take me a little too far into lullaby territory. Thankfully, the song barely makes it over a minute.
Perhaps the epitome of what happens to chillwave when the lights go out, Moon Killer sets itself apart from the recent surge of free mixtapes with its dark grooves, unexpected collaborations, and fade-away fantasy feeling.
PrevPreviousDeep Impressions – Katalyst
NextCarrion Crawler/ The Dream – Thee Oh SeesNext