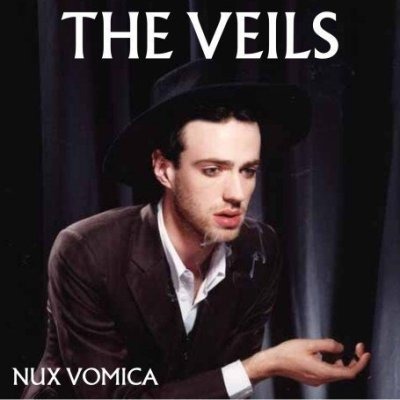 On the cover of The Veils’ Nux Vomica, there is a morose-looking young man dressed in black, a black cigarette dangling from his fingers as smoke wafts from his red mouth. An alluring cover, to be sure. The cover boy is none other than The Veils’ front man, vocalist, and songwriter Finn Andrews. Gazing into space with his forlorn blue eyes, Andrews looks too pretty and too sophisticated to be a rock star. Perhaps a piano jazz musician at a gloomy speakeasy, a lounge singer, or even a beatnik poet. His sound ought to be soft and gentle, perhaps touched by melancholy, but ultimately smooth and pacifying.

It took less than a minute into the first track to destroy my carefully constructed image of the young musician from New Zealand. “Not Yet” starts innocently enough with a folk guitar accompanied by sparse keys, but when Andrews’s surprisingly raspy voice kicks in, the danger of opinions based on something as frivolous as an album cover became apparent. Andrews’s voice howls and cracks and moves the song to climax as he croaks out, ”Love, I have tried to find you.”

At first, Andrews’s cacophonic, screeching voice invites comparisons to a dying mountain lion, but as the album progresses, one becomes accustomed to, even appreciative of, his emotionally-charged delivery. “Cacophonic” becomes “charming” and “screeching” becomes “distinctive”. This music is neither soft nor gentle, and certainly not pacifying. It is rousing, and in some places, disturbing. On “Jesus For the Jugular”, one of the many tracks on the album that challenges the authority of religion, Andrews’ pained, serrated voices rises to new and jarring heights when he snarls out, “There’s a bulls-blood fountain in the pit of a moan/I will summon an eclipse on my way to the Lord.”

Still, my instincts about its melancholic nature were correct. No one could mistake this for the feel-good album of the year. Andrews paints for us scenes of doom and gloom, a fine example found in the comparatively upbeat track “A Birthday Present”, which sounds innocent enough until he builds to “Indelible stains on the human race / you hideous fakes and murderers!” Dark imageries and themes are to be found in nearly every song, and at times, Andrews crosses the line between poetic and pretentious. Such melodrama tends to be frown upon in today’s culture of apathy, but these dramatic presumptions suit Andrews well; the album would have been far less entertaining without its darkly dramatic edge.

Nux Vomica is an intelligently crafted album. The music is catchy, but not irritatingly so, and in conjunction with Andrews’s dour voice and words, it is an unexpectedly superb work of art. Perhaps my initial, superficial assessments were not entirely off-base; indeed, Finn Andrews is too sophisticated to be called a rock star. The man is a musician. One might even call him, if you can stand the dramatic pretenses, an artist.