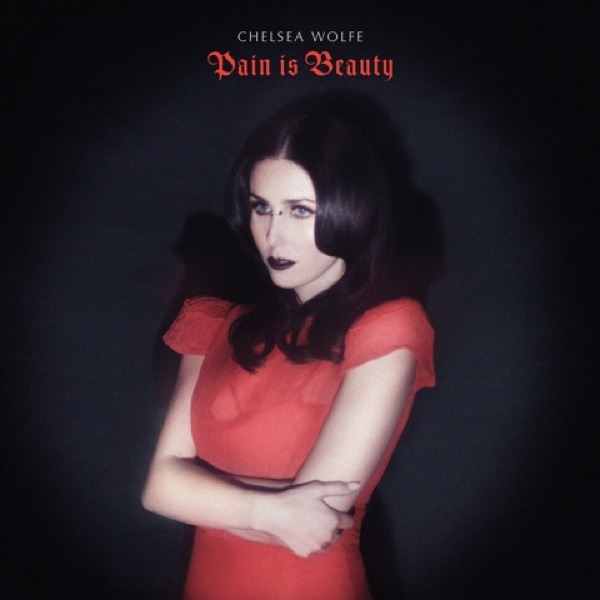 The LA-based Chelsea Wolfe is known for her aptitude at fusing unlikely genres. She’s molded a sound that’s unique as it is serene, drawing elements from folk, blues, drone and black metal to name a few. While admittedly walking a fine line between kitsch and sincerity at certain times, each release has managed to build upon the material that’s preceded it; Wolfe pushing her sound outward in ever-new directions. Pain is Beauty, Wolfe’s fourth studio album in three years, has much more of an electronic feel than any previous record. It features less of the folksy guitar work and compositional minimalism, supplanting that earlier sound with a stratum of strings, synth and looped effects. The music feels bigger, deeper and more mature, and yet still manages to retain every bit of the bleak and dreary darkness.

The album kicks in with “Feral Love,” a slow, gaiting track that sets the tone for what’s to follow. It’s foreboding in its brooding intensity, “Run from the light,” Wolfe’s ephemeral voice murmurs out over layers of synth, piano, and noisy percussion, ”Your eyes black like an animal.” The song builds in intensity, culminating in a mantra-like chant backed by falsetto vocals and crashing thunder. The listener is confronted with a ferocity that’s new to Wolfe, a tranquil forcefulness that’s akin to a typhoon or tornado, mesmerizing even in its destruction and utter devastation.

Lyrically, Wolfe hones in on the beautiful intensity of the natural world. Each of the twelve tracks is a pensive reflection on notions of collapse and renewal, conjuring images of fierce winds, tsunami waves and forest fires as the earth opens and swallows civilization whole. The subject matter allows Wolfe to explore new vocal boundaries, demonstrating an unseen dexterity as she travels from whisper to falsetto. For the first time, her vocal capacity is truly unleashed as she pushes her voice through effects pedals to transform it into an instrument of remarkable efficacy.

Taking cues from 80's goth/industrial acts like Swans and Death in June in her darker moments, Wolfe also offers a momentary respite into a less-morose disposition. The song, “Destruction Makes the World Grow Brighter” is more upbeat, its catchy melody breaking the tune of dreariness and gloom. The oohs and ahhs that border on the extraneous are Wolfe flirting with the notion of a pop single. Even still, she manages to keep a tasteful demeanor throughout the brief digression, stopping short of a full descent into the popular genre.

But then suddenly the darkness returns with “Sick,” back like a recurring nightmare as the track begins with a lone organ and slow, haunting vocals. “I’m not the kind of sick that you can fix,” Wolfe reminds us, just in case the previous track had given us any illusions otherwise. The song changes pace halfway through, transporting the listener to a dream-like void, effected vocals and droning synth crying out over a clutter of electronic percussion before gradually fading into uneasy silence.

Perhaps it is Wolfe’s investigation into depth and range that is her true feat with Pain is Beauty. “The Waves Have Come,” despite being more than 8 minutes in length, manages to maintain a level of cogency the entire way through. The song ebbs and flows, swelling then dissipating again, piano strokes crashing behind layers of viola and bass clarinet to build into a howling rage of fortissimo before disappearing back into the nothingness from which it sprang. The song is Wolfe’s chance to show off, demonstrating a compositional prowess unparalleled in her previous work. Each movement is carefully thought out, changing dynamics calculated precisely to provoke an array of emotional responses.

Pain is Beauty is Wolfe breaking out in a sense. She sheds the veil of distortion and allows her vocal breadth to truly shine through. It’s an offering that’s both honest and compelling. As she moves from songs that feel like horror-film soundtracks to heart wrenching ballads and acoustic hymns with a striking ease, Wolfe demonstrates a cunning and sophistication that seems to suit her poignant solemnity just about right.