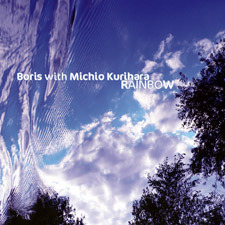 Like mad librarians of their own histories, Boris tears pages from the volumes of sound it's already documented, re-paginating a story that begins in primordial down-tuned sludge rock, trudges through the hazy metal of Pink, and rises triumphant into the present & pristine illuminations of Rainbow.

With so much stacked in its hands, Rainbow carries the potential disaster for tracks to tumble down isolated tangents, but the echoes of the band's past are enough for the album to maintain a well-measured balance. “Raffesia”, the opening track, risks wandering aimlessly into that slow, dull-edged ear-roughing that translates to “quiet part” in post-rock, but up rises a blues-driven psych line, and while the song does crash heavier and louder than it began, it's cut a new path towards its calculated end. (These surges back towards psych rock are often brought about by the guest guitar contributions of Michio Kurihara, a member of the long-lived but sparsely storied Ghost, who have a new LP, In Stormy Nights). The last track, “No Sleep Until I Become Hollow,” perches precariously on the album's narrow end, almost in response to the first track's close-to-bursting restraint. A soft tape hiss resembles a cold mist over guitar lines laid softly along four static minutes. It's the long-tethered restraint of post-rock, with out the bombastic payoff. The album's remaining tracks tend to waver between these two book-ended pieces.

The title track, “Rainbows”, is whispered in a lounge back in swinging London, stylized in a slow motion groove that sends guitar solos wafting like cigarette smoke. It has a residual compliment in “You Laughed Like a Watermark,” but the tune is different, the angle slightly askance: a delicately sparse, morosely grungy guitar riff.

And there are plenty of tracks that hearken back to Pink, (though curiously, almost none that refer to the drone metal of their Sunn o))) collaboration, Altar). For instance, the production choices in “Fuzzy Reactor” are initially curious; intensely close-mic’d lead guitar panned hard right, with muddled rhythm guitar playing distantly to the left. It's a choice that mimics the old mono recordings of the 60's while resuscitating the best of Pink's jam-crunchy psych romps, with Kurihara continually battering at the boundary between psych and metal with his multi-toned guitar solos. It's slightly novel for Kurihara and Boris, and though it's an environment we've wandered before, we'd never followed these wizened guides.