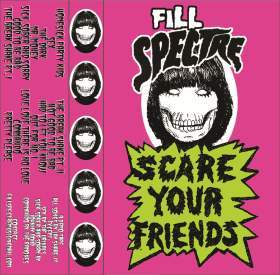 It’s been awhile since I’ve fully extended my arms in public, dressed in headphones and a gallup, ready for anything except for bed. But, there it was, at some stupid hour somewhere between the Chauncey J stop and Central Ave. The grip, ripping through the seams of my headphones. A light, a fire, a fucking movement. True gasoline. The real, the raw, the spirit.

Fill Spectre’s bawdy, self-released earworms aren’t the future of rock ‘n’ roll or punk or anything, but a bold strike from the flesh. These 14 tunes, these 14 pulses, are leaps from the bedroom floor down into the basement, the musty, dingy cavern of a den rife with B.O., with pheromones that reek of ripe vagina spewing from everyone’s pits. The indescribable shit that keeps the record knob at full torque and the body barreling from corner to corner. Scare Your Friends brings the heat and the breaks, cultured and fucked, a little something something from a man involved in a band that turned our heads less than a year ago. It’s time to not only familiarize yourself with Pow Wows, but their guitarist Jay Share-It…and his bedroom project.

From start to finish, Scare Your Friends converges Share-It’s manipulation of mic placement, pop-hooks, and bizarre drum sequencing with licks of flex, fret, and distress. The play, the grasp, the understanding of his sound is an adaptation borrowed and splintered into a straightforward romp of bar and open chord construction. In using a Roland Rhythm PB-300 drum machine to fill the role of percussion, Share-It’s distorted down strokes of modulated, distorted, and blown out guitar lines issue in an industrial punk style that both anchors the sound into the lo-fi and floats it around the early efforts of late-aught bedroom rippers Nathan Williams and Ty Segall. His style displays a variegated tongue, as well. Share-It's graveled and froggy delivery reminisces Steve Wharer of The Trashmen, fellow Canuck/rockabilly revivalist Bloodshot Bill, and, of course, The Cramps' obstreperous frontman Lux Interior.

His covers of Johnny Bond’s country, tear-drop swinger “Sick, Sober, and Sorry,” The Ramones’ “Commando,” and The Urinals’ “Sex” displays a swagger which allows him to not only have fun with some of his favorite tunes, but to totally own his style enough to fool you into thinking that they are his very own. While those will get some old heads nodding in appreciation, it’s the originals “The Dark,” “Had To Let You Know,” and “The Break Shake Pt. 1” that’ll have both the youth and Modern Lovers and Suicide patch-wearers chuggin’ Buds together. Despite the break-neck, bloodied knuckle barrage of covers and originals thrown up on to the spool of tape comprising the limited edition cassette, Share-It displays a balancing respite with the sensitive, hand-holding balladry of acoustic numbers “Good To Be Bad” and “Pretty Please.”

With Scare Your Friends it’s not so much about freaking them out, but turnin’ them on. Don’t be surprised when this thing catches vinyl. Forget the deodorant, you don’t want to be all Right Gaurd Xtreme Sport when you puke. It's only natural, man.