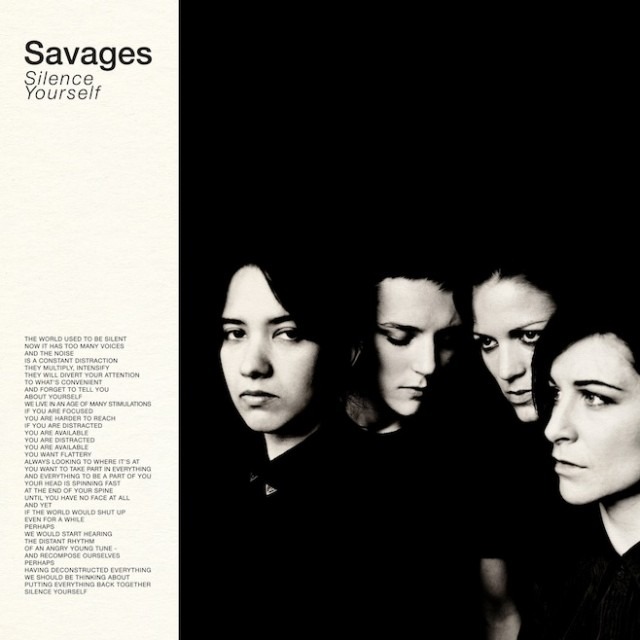 Before I’d even listened to Savages’ debut LP, Silence Yourself, I was thinking about the character of Kurtz. There is a scene toward the end of Apocalypse Now where Kurtz asks Willard in shadows of foggy darkness, “Are my methods unsound?” to which he responds, “I don't see any method at all, sir.” On first inspection, Savages and Kurtz are categorically diametrical, in that Savages appear to me as buttoned-up and tightly wound as a fistful of barbed wire, while Kurtz is loosely tethered to the bounds of humanity, floating in no man’s land. But when I delved into the mythology Savages created to circle them—they asked for their beliefs to be respected, complied with, repeated, and tied to their music like a full-body tattoo—it seemed that the similarities were initially blinding. The two entitles lie on the fringe in combined drastic, radical, and defiant ways.

Savages, for a new band, are remarkably unapologetic. In the oft-channeled “manifesto” that appears on the cover of their record, the group makes grandsweeping statements about censorship, morality, the sicknesses of our age. Just as deeply as Kurtz falls into the heart of darkness, Savages give the impression they emerged from that same place as teachers of a message for the new world order. However, presenting yourself one way is entirely different from actually being it. And with this group of morose, post-punk unsmiling prima donnas, the image is most certainly there, the manifesto in all ways accounted for, but when it comes to the music, in the experience of listening to Savages, who are we really talking about?

In covering a band as purportedly insolent as this one, it is hard to avoid the other critics’ take on their rise to success. The overwhelming majority absolutely adores this record, this band, this image, this desire to be represented as something that the music landscape has been supposedly missing. In Lindsay Zoladz’s glowing review of Silence Yourself, she claims the mythology would not “be worth mentioning if the music didn’t live up to the force of the message.” In so many ways, I want to believe that any of this is true; that the constant, incalculable positive critiques comparing Savages to Wire, to Clinic, to Joy Division, to Siouxsie and the Banshees, were valuable in that they spoke to what the band accomplishes in power, heart, or passion, or at the very least, conviction. The cold, dark platform of post-punk usually attempts to undermine those three qualities. However, no matter what genre we’re discussing, if the band is good, they’ll possess at least one, if not two, if not all of them. Savages adopted a strong-willed, caustic attitude, ethos, and image to mask how petty and heartless their debut record really is. It has worked to convince most.

Silence Yourself is practically a U2 record. It may as well be a Muse record, without the orchestral, rock opera leanings, and at a much slower tempo. It’s as much a Queens of the Stone Age record as it as a Coldplay record as it is a Kidz Bop Sings the Beatles album playing at a children’s shoe store in Wilmington, Delaware. The so-called raw power critics keep mentioning is so dampened down by rhetoric that it barely exists. The eleven tracks that tingle and echo with the mawping voice of lead woman Jehnny Beth are boring, willingly unintelligent, and barbarous tributes to songs that actually do matter, songs that you might actually find on War or Closer or Pink Flag. Everyone keeps talking about how similar Silence Yourself is to other albums and bands, but no one challenges Savages' mixed messages or bothers to pull the veil revealing little else than a wedding cover band dynamic. How can you demand that we silence ourselves in favor of your uninterested, bored music? As Kurtz says to Willard in his smoggy den, “There is nothing I detest more than the stench of lies.”

Savages triumph in their ability to manipulate the publicity machine. If you knew nothing about them, you’d still likely quake in reverent fear when you saw their unsmiling heads hanging in blanched contrast on a black cover, a cover that also tells you to shut up. There’s no reason why that’s necessary. The hollow shill of Gemma Thompson’s guitar is mastered and bounced down so impeccably that it’s hard to find even a remotely beating pulse; the same goes for Fay Milton’s over-produced, over-the-top drumming. This isn’t Yes—we can relax with the floor toms for a bit. The most redeeming quality of the record is in Ayse Hassan’s raw, organic bass playing, which hits and punches exactly at the right moments, though we wish these moments were more and with greater nuance. It’s no surprise that Hassan is the only member of Savages looking at the viewer on the cover of Silence Yourself—she may be the only one brave enough to stand by what she’s written.

Savages are a band that couldn’t be further from what they claim to be. In all the reviews, there was nary a writer who forgot to mention their live show. Though it’s not the same, their live-stream from London was all smoke and mirrors, literally—it didn’t remotely contribute to my enjoyment of Silence Yourself, as the power they supposedly emit feels as farcical and as parody-driven as Jay-Z covering Oasis at Glastonbury. The unforgivable issue with the band’s entire aesthetic is that since they claim to buy into the nature of this severity, this cold-hearted, calculated manifesto, they could at the very least really lose themselves in it, giving into the supposed density of their darkness, just as Kurtz did. The awareness they have of their ploy leaves a bad taste in my mouth, and I refuse to be manipulated. The horror in Savages’ demand for us to silence ourselves is that they couldn’t come up with something better to say in our stead.