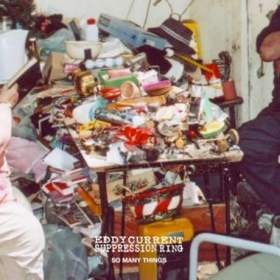 Eddy Current Suppression Ring’s new compilation album So Many Things, begins with a song of the same name, one of the first tracks the Australian band ever recorded. “So Many Things” earns its name, combining one of the sickest organ beats this side of the sixties with the first abrasive, then hilarious ad-libbed rantings of lead singer Brendan Suppression. Spitting offbeat phrases and random bits of anger into the microphone like a deranged Eric Burdon circa “Spill the Wine” or a drunk Jonathan Richman, Suppression channels the inebriated confusion of a post-breakup jam session, side-splittingly uninhibited.

“So Many Things” is a good beginning to and one of the high water marks of the new two-disc collection that brings together the band’s assorted singles and split 7” recordings. So Many Things houses singles as old as 2004 and as fresh as this year’s Record Store Day release, an awesomely weird cover of The Go-Go’s “We Got the Beat.”
As the opening song suggests, one of the consistent threads running through So Many Things is an obsession with mind-wrenching madness and wacky witticisms. From their lively cover of The Pagans’ “Boy Can I Dance Good” to the jangle-y “Noise in My Head,” Eddy Current Suppression Ring focuses on the friction between their ears before all else, seeing everything through the lunatic stream-of-consciousness of their lead singer. Brendan Suppression’s craziness is allowed to run free over an impossibly tight band, giving him direction even as he floats off, preoccupied with his own words.
The band is definitely more interesting when Suppression rants than when he repeats. “Precious Rose” is almost the compliment to “So Many Things,” sounding like the euphoric Tourette's brought on by the mentally unstable early days of infatuation, even if it is a bit more reined-in than the band’s earlier releases. Other numbers, like “I’m Guilty” and “Get Up Morning,” focus on a single phrase, rearranged and reemphasized over a churning beat. This repetition, still harping on smart and sassy one-liners, makes Suppression easier to listen to, but strips the songs of the excitement his more unpredictable lyrical play provides.
Bouncing back and forth between straight-up punk rock numbers and some really sixties-era garage rock sounds, Eddy Current Suppression Ring span the gauntlet of weird and wild music, bringing in influences from The Troggs to The Barbarians to The Stooges. Their aptly titled collection throws the kitchen sink against the wall with a rare and gleefully unhinged energy that just might be the first signs of pure, divine insanity.
PrevPreviousSingles 2007-2010 – Ty Segall
NextLive At The South Bank – Kieran Hebden/Steve Reid/Mats GustafssonNext