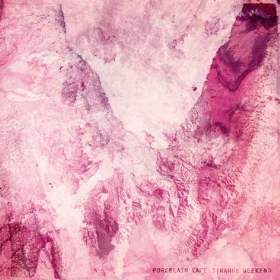 After a few standout EP’s over the past couple of years, Porcelain Raft finally sat down and crafted his debut full-length, Strange Weekend. With the oh-so-familiar DIY Brooklyn mentality, Mauro Remiddi, the sole member of Porcelain Raft, managed to create a telling and heartfelt album that layers itself in murky reverb and occasional distortion. Musically, Strange Weekend does its best to deceive, but upon hearing Remiddi’s glossy vocals and impressive songwriting, it quickly becomes evident that Porcelain Raft is much more than your typical bedroom/laptop project.

Album opener “Drifting In And Out” does exactly what its title says, with Remiddi harmonizing over arpeggiated guitar riffs and crisp keys that weave their way
through the albums lo-fi production. While “Shapeless & Gone” continues to trudge on in the puddled echoes that Animal Collective have endlessly explored in the past. Remiddi is clearly aware of his contemporary influence, doing his best to expose it on “Unless You Speak From The Heart,” a track that sounds eerily similar to Grizzly Bear’s “Two Weeks.”
Strange Weekend does a wonderful job of dazzling its listener the first, and maybe even second time around, further listenings reveal that Remiddi is more-or-less a one trick pony. Each song is drenched in reverb, simplistic minimal usage of percussion, and a sporadic, shoegazy riff thrown at you here and there. On a superficial level it’s pleasantly tranquil, but formulaic and tiring, the deeper in you go.
Porcelain Raft is extremely good at what he does, and there may not be a better example of this than on album closer “The Way In.” It’s a dream-pop, Slowdive-esque ballad that really comes to life and flourishes upon its increasing layers of vocals, strings, electronic drums and cymbal crashes; not only is this the best song on the album, but it may end up being one of the best of the year.
So while Porcelain Raft is clearly capable of creating terribly captivating music, it quickly becomes clear as to why he was so fixated on the EP format. A lot of what was said on this album could have been done so in less time. Never the less, there are plenty moments to cherish.
PrevPreviousAttack On Memory – Cloud Nothings
NextThe Horror – Pop.1280Next