Surrender to the Fantasy – Magik Markers 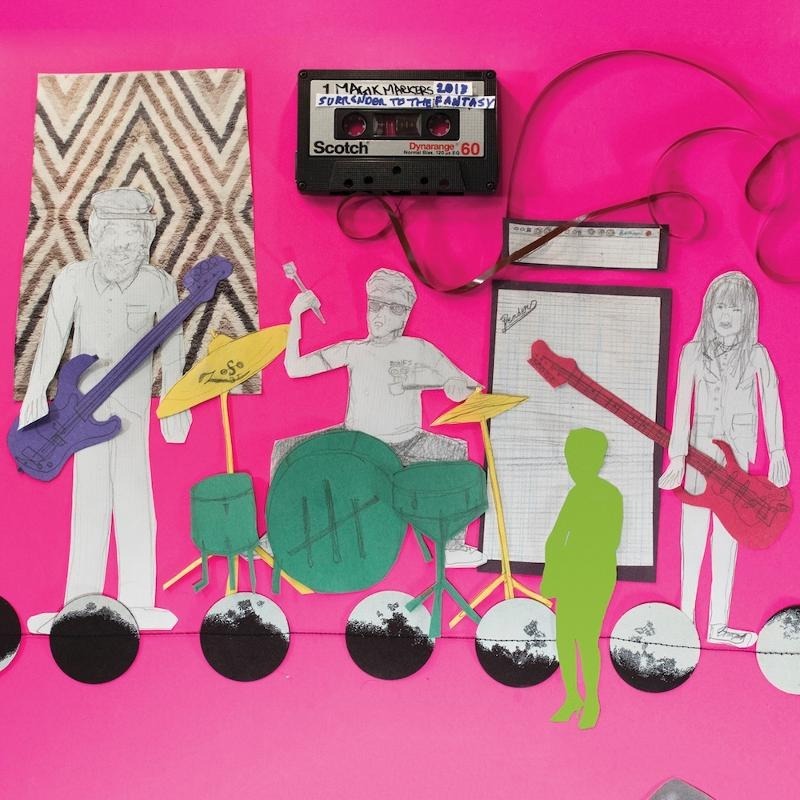 Some musicians make music. Others play music. This is an important distinction—Cat Stevens made music the way your grandmother makes a casserole; Captain Beefheart played music the way kids play pirates. To me, the musicianship of Magik Markers has always fallen into the “play” category. Despite her many years with the instrument, guitarist Elisa Ambrogio still uses her guitar as though she’s figuring out how it works, and the delight of that exploration is contagious. Her exploratory noise-making comprises the central energy of the Markers’ live show, while drummer Pete Nolan keeps the whole trainwreck moving forward and an occasional “song” sneaks through the fray.

But you don’t play an album; you “make” one and hope that the “play” aspect shines through anyway. This simple truth might ruin the efforts of lesser foil-hatted explorers of the sonic cosmos, but Magik Markers have proved themselves up to the task time and again. Their latest, Surrender To The Fantasy, bespeaks a keen but wonky understanding of pop songwriting, echoing disparate parts of that broad tradition without losing the sense of “play” that has been the Markers’ thing since the beginning. The sound is cleaned up, the songs more direct (as has been the case on the last two of the album’s predecessors, Balf Quarry and Boss), but I wouldn’t call it a process of maturation, because that would miss the mark entirely.

“Crebs,” the album’s oddly-timed opener, is punk with the hiccups, inviting you to wiggle and then throwing you out of the groove. “Everything around me feels so free,” Ambrogio keens, and those are the only lyrics I can understand. The vocals are EQed in an obfuscating way, so you have to strain to hear the consonants. When the lyrics do come through, they tend to have a “thing” to say, a pointed message, which sometimes detracts from the “noise for noise’s sake” aspect of Magik Markers’ performance. I end up treating the words as a separate thing happening in parallel— which often means not paying attention to them until a track like “American Sphinx Face,” with its surreally preachy, almost accusatory narrative, forces me to. “In America, every man’s a king. No good king but a dead king. I got no feudal feelings. You can take my life but you can’t take me.”

“Acts of Desperation” has Pete Nolan playing lead guitar—the song comes from a sort of hybrid between Jefferson Airplane and the Stones at their rootsiest, but it’s just wonky enough to fit here. The rhythm guitar is out of tune, and the lead guitar sounds anything but deliberate. “Mirrorless” recalls the softer side of the Velvet Underground, and for me it’s one of the album’s highlights. It’s not what I expect of a Markers tune. It’s the kind of song that invites you to comfortably zone out entirely, and sneaks in a little surprise, a minimal variation that makes you feel something. It’s a crafty move, and it’s what I’m referring to when I say the Magik Markers know how to make what one might call a “good pop song.” “Young,” however, pushes that beyond its limits. Aside from the sort of choppy presentation, it’s some Taylor Swift sap. But it’s the album’s only weak point, and it’s not unpleasant to listen to (which might be the problem).

The album ends on a languid rocker, “WT,” one of the album’s strongest tracks. It’s built on the skeleton of something Lynyrd Skynyrd might have played, but the meat on its rock-solid bones is chaotic and irreverent. “Hey white trash, drinking pepsi, I’d love you if you’d let me come in.” Like many of the best Markers recordings, it tells the story of No Wave accepting its ancestry, like wolf-children moving back in with their birth parents.