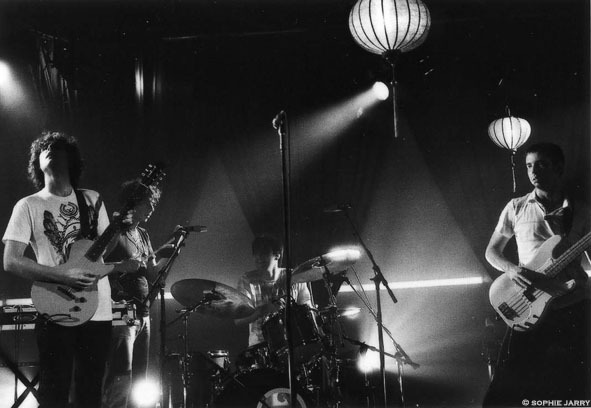 The Basement in Columbus, Ohio is a canned rendition of how a concert venue should look. Purposely dingy, with low ceilings and walls plastered with peeling posters that when given a closer look are only a few years old, it provides a humbling, even though gilded, atmosphere for indie rockers. The dollar cans of Natti Light help out, but Pabst Blue Ribbon would be better.

The Rapture took the stage to a tightly packed crowd of aging hipsters and wide-eyed teen worshipers. Perhaps it was the close quarters, but for the first four songs of the set, I began to wonder if people never danced in Ohio. This phenomenon happened frequently, but I usually attributed it to hip hop show posturing or just Midwest malaise. I never thought opening with “Out of the Races and Onto The Tracks” would have any other result besides mayhem. Judging from the crowd, I’d guess the song pre-dates the Rapture they came to see. Nonetheless, it is still one of the band’s greatest dance-inducing achievements for me, even if no one else got it that night.

The Rapture is resilient with their infectious funk-punk. Bassist, Mattie Safer had me mimicking his jerky, yet rhythmic head nod on numbers like “Pieces of the People We Love” and “W.A.Y.U.H.” While, no matter how cliché it is getting, no one can resist Gabriel Andruzzi’s cowbell expertise, “House of Jealous Lovers” is his shining moment and his energy with such a small instrument is contagious. By the time the band got into their hit from Echoes, no one could resist at least offering up a sway or fist pump in appreciation. I must say, I’ve been waiting a while to hear it live and while the echo on Luke Jenner’s guitar is slightly bothersome, they nail that song with killer precision.

The band truly set things off though, when they played “The Sound,” which sounded downright vicious. The skittery electo-synths sent a buzzing pulse through the crowd breaking the place into a dance panic.

The Rapture’s U.S. tour is over and if you missed this one, I’d urge you to not miss them when they hit the road again. You can see it in how they perform; they love their songs and love winning crowds over. It might start out slow, you might try to resist the beat pretending like you’re not there to dance, but they know they’ve got you. Just seeing them win over Columbus has me sure that hardly anyone is capable of resisting the Rapture.