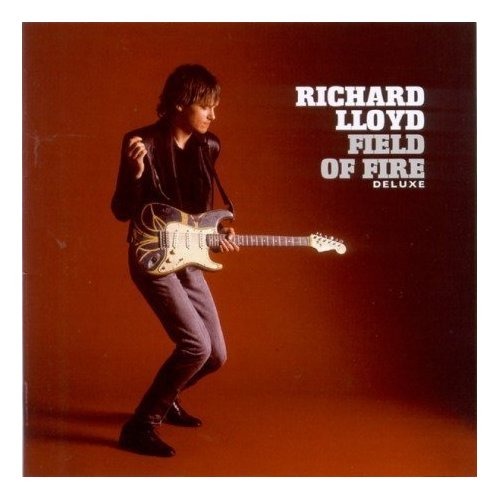 The seminal Please Kill Me casts Richard Lloyd as Television’s beautiful junkie, one of rock’s first, before Sid and way before Pete. One photo shows Lloyd hospitalized, hooked up to an IV with a cigarette tucked in his mouth: the model of heroin chic with floppy hair, hollow cheeks, and sunken eyes. When I saw a xeroxed flyer advertising guitar lessons from Lloyd that posted his email address and phone number last year, his status was chipped away ever so slightly. More than anything, it seemed unexpected – he was an icon, wouldn’t he want more privacy than that?

Now Reaction has re-released Lloyd’s 1985 solo album, which he has attentively re-mixed and re-mastered. A second disc accompanies Field of Fire with fresh recordings of the album’s original songs as well as completely new material. Just as unexpected as that flyer, the original Field of Fire is less enjoyable, interesting, and tasteful than the second disc, on all accounts the original’s superior.

Field of Fire is primarily plagued by the age of its birth. Bad 80’s production values soak through its guitars and Lloyd’s overwrought, chorus-laden vocals. Lloyd doesn’t echo the cool New York swagger of Johnny Thunders; the proto-punk sounds depressingly like Bruce Springsteen, especially during a few big-as-U2 choruses. Some songs shimmer in more angularly melodic directions, but are still not really post-punk without the Television historical connection. Lloyd reaches his most poignant on “Pleading,”crying out, “I’m pleading, take away the pain” and leading us closer to New Order territory and further away from New Jersey.

Overall, the second disc’s cleaner production and more natural vocals makes Lloyd’s music more vibrant and modern, partly because it does have a more contemporary post-1985 production aesthetic. Yet, there are distinctly Lloyd elements – rhythm guitars pull off Heartbreakers’ glam beats and the sharply melodic solos are speedier than anything dubbed post-punk.

Richard Lloyd is a confusing figure – he tours with Television but also actively seeks guitar students; he re-releases old material but pairs it with new recordings that are better. I’m curious to see what comes next from Lloyd, but won’t be putting dollars down either way.