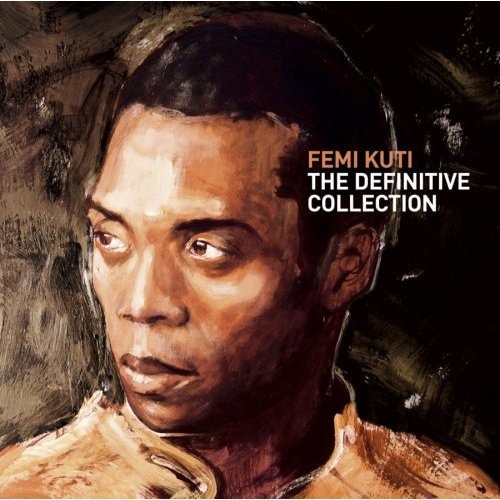 World music has had its share of superstars– musicians who pioneer new sounds for the global market while gaining awareness for their countries. None, perhaps, have been as tragic as the Nigerian Afrobeat legend Fela Anikulapo Kuti. Like Bob Marley, he imported his own style to the states while bringing new beats and ideas home. But unlike Marley, he was prosecuted all his life in his own country, facing frequent raids, arrests and false charges by an increasingly totalitarian home regime. He even lost his mother in a police raid on his home—she was thrown from a window and died of her wounds. When Fela died, suddenly, of AIDS in 1997, the world mourned the loss of one of the pioneers of both world music and a more humane Africa. But he was mourned even more so by his eldest son, Femi.

Femi Kuti’s heartbreaking song “’97”, included now in the double CD set The Definitive Collection, tells the story of their family, who faced not only the loss of Fela that year, but also the unexpected deaths of younger sister Sola and cousin Fran. It’s a heartbreaking tale told in an Afrobeat style—which incorporates jazz and funk with the music of Africa, not only for dancing but also for celebrating, lamenting, decrying and speaking out. Even at its most fun this is still a revolutionary music, something that the current American inheritors of Afrobeat could learn from.

Femi’s music differs from Fela mostly in format: he prefers shorter, definitive tracks rather than his father’s sprawling, often twenty-to-forty-minute recordings. It’s slightly more accessible, with less improvisation and a smaller band. What remains the same is the Afrobeat groove, accented by saxophones and brass, and a strong, direct, politically-charged voice.

The Definitive Collection spans only a handful of albums, which sounds less like a “Best Of’ and more like a mid-career recap. But the best of his songs are represented here, from rare tracks of the late ’80s to works with Mos Def and Jaguar Wright on 1995’s Fight To Win. Only one track attempts a remake of his father’s music, a big and grooving “Water No Get Enemy,” that features the likes of Macy Gray and D’Angelo. It’s a song about the common people of Nigeria, and is listed among Fela’s personal favorites. The collection is rounded out by a bonus disc of remixes no one really asked for.

It’s a triumphal music, triumph even in the face of tragedy, which is why Femi is the undisputed heir of Fela’s genius and not just another example of musical nepotism. Songs like “Ala Kalkoum” are hard not to dance along to, the sound is so heavy. And his “Traitors of Africa” is compelling even today, since the horrors he’s describing have yet to be rectified.

The Definitive Collection should be a good starter for newcomers to Afrobeat, though there isn’t quite enough new material to appeal to old fans and the remixes don’t really count. This also marks the beginning of a new tour for Femi with dates all this summer, including NYC’s Central Park Summerstage and an appearance today at Lollapalooza.