The Distant Future – Flight of the Conchords 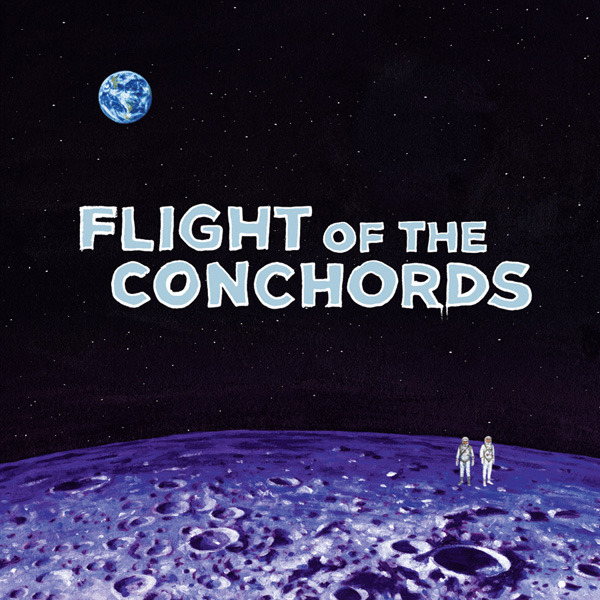 Flight of The Conchords (aka Jemaine Clement and Bret McKenzie) have achieved success in their native homeland of New Zealand as well as the UK, and with the release of their HBO series of the same name, the Conchords are poised to break into the mainstream as the new indie darlings of America’s alt-comedy scene. Their six-song EP The Distant Future is a smattering of what these two pranksters already have made available from their 2005 HBO One Night Stand half-hour comedy special, along with whatever else they might’ve already debuted on HBO. I do not have the premium channels.

The bomb shit right here son. Their signature love song, originally performed as a two guitar acoustic folk/funk groove. Recorded here with lush studio treatment and full band and backup vocalists. Amazingly sensual. The new waitress where I work at night sings this sometimes when I give her a ride home, and usually by the time I drop her off I’m ready to fuck the shit out of her tiny little body. She’s like 5’4. Pretty tight.

A very brief ballad with McKenzie handling strong lead vocals and Clement on the baritone chorus. It’s a sweet love song that quickly deteriorates into a bawdry proposition, all while maintaining a loveable and friendly cadence.

One or both of these guys are obvious Pavement fans. Their sighing is very Malkmus-esque, and overall this is the album's most endearing song, right up until the moment when they declare, “These aren’t tears of sadness because you’re leaving me, I’ve just been cutting onions. I’m making a lasagna, for one.” Full studio treatment makes the comedic aspect of what they’re trying to achieve all the better.

The strongest track off the EP. Recorded live at Comix in New York City. This is very funny. The new waitress sings this one too, but it’s not as sexy or funny as when she sings “Business Time.” Though for my money’s worth, this track is what Flight of The Conchords are all about.

This is a sample of the two of them talking in between songs, pulled from the same live recording at Comix in New York city. Normally I would not care, but the New Zealand accents give it an entertaining “Mad Max” vibe.

From the same live recording at Comix, many will see the beginning of this song as a rip off of Conan O’Brien’s “The Year 2000” skit, but it's the hacky aspects of this song with robots and the future and shit that make for a good spin.